You are Here: Masala Herb » Seasoning 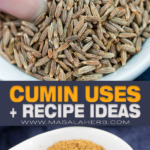 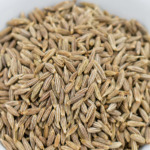 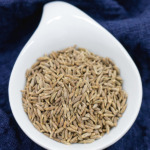 So, you want to learn more about cumin spice?

This post will help you to understand better how to use cumin spice in your food, and you will collect some ideas too.

Cumin is a spice seed grown from the cumin herb, a plant with small white flowers.

It's a warm, heating spice. Cumin tastes aromatic, pungent, and nutty. Due to the flavor profile, the seeds find many uses across the world.

The spice grows best in hot, arid as well as subtropical, and tropical climates. These areas also tend to extensively enjoy this spice in their local foods.

Cumin spice is known to be a staple in Mexican food. Colonial Spaniards and Portuguese introduced the spice to the new world.

It's also a very important spice in Indian cooking, where it is known as jeera. Most Indian dishes call for cumin used whole or ground.

The spice has an ancient tradition in African and middle eastern countries too.

Cumin is usually sold as whole seeds or ground.

I personally buy both varieties, because I like the convenience of using ground cumin when I'm in a hurry. Besides, sometimes you simply need whole seeds in your food.

You might want to always grind your own spice just before using it in your food if you want clean and intensive flavors.

Cumin varieties exist, but those are rarely mentioned on labels. People also never take the trouble to differentiate between the types and qualities.

The varieties do not have clear names but are instead differentiated by the shade. Some are lighter and others darker.

The different types might indicate the area of origin. Cumin is mainly cultivated in India, Iran, and the Middle East.

💡 Spices that are confused with Cumin

There are two major spices, which are frequently confused with cumin.

Caraway looks like cumin but tastes very different. Central European countries call caraway cumin in their languages. I.e. Kümmel in German, and this has created confusion.

This problem also appears in the rest of the world, caraway seeds are at times mislabeled as cumin seeds.

The second spice is Nigella Seeds, which doesn't even look like cumin. Nigella seeds resemble black sesame seeds by the looks.

The nigella spice is also known as kala jeera, black cumin, kalonji, and even black caraway. The names are the main reason why nigella seeds are confused with cumin spice.

To add to the confusion, Kali Jeera, also called bitter or Kashmiri cumin, is an actual cumin variety or subgroup of a spice, which has nothing to do with nigella seeds.

Other spices that can be confused with cumin by the looks (never the taste) include ajwain, lovage seeds, celery seeds, fennel seeds, and anise seeds.

Yep, that's a lot to digest!

🧂 Spices and Herbs to Use with Cumin

Here are some spices that go well with cumin.

Depending on the cuisine, you can add other spices to compliment cumin.

Can I substitute cumin with another spice?

I don't think so. There is no other spice that tastes like cumin. Caraway is a poor substitution, they both taste very differently. Somebody who claims to substitute cumin with another spice must have used poor-quality, less aromatic, old spices.

Is cumin a healthy spice?

Spices are edible (or else they wouldn't be called spices) so they are all healthy and nutritious to a certain extent. Cumin is most commonly used to treat digestion problems.

What's the best way to intensify the flavor profile of your cumin seeds?

There is a trick to increase the taste of your whole cumin seeds. Although, it doesn't work with ground cumin. You can dry fry (toast) your cumin seeds in a pan, shaking the pan regularly so that the seeds don't burn on until you can smell the aroma in the air. This is commonly done in the Indian subcontinent. Cumin is also fried in oil with other spices in the area, such as curry leaves and coriander seeds. This technique is known as tempering.

Here are some great uses for cumin spice. That should give you an idea of how to season your dishes with cumin.