Helene Dsouza
Velvety vegetarian Paneer Korma Recipe; an easy and quick Indian cottage cheese curry with almonds, spices and yogurt. Make sure to cook the curry on low heat as this is a curd based curry and over heating can cause curdle.
Total Time: 20 minutes
Prep Time: 5 minutes
Cook Time: 15 minutes
3 servings
4.46 from 11 votes
Jump to Recipe 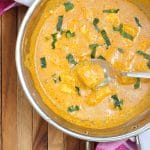 Earlier in the day, I cooked this easy and quick paneer korma recipe when I realized that I hadn't yet posted this aromatic Indian cottage cheese curry.

Luckily I was a bit early in preparing lunch, so I kept an extra hour for the whole picture making so that you could also benefit from this one-pot easy and quick Paneer Korma

Believe it or not, creating a recipe post can take a while.

Family and friends are at times very much surprised by the fact that the recipe post creation process can take in average 8 hours.

I always make sure that the pictures comes out half decent and that each cooking step has been captured, and then comes the writing, editing etc etc.

I am not complaining of course, how could I?

Sometimes, before I dedicate my time on a post, I would read a well written book.

In recent times I have been getting lost again in the history of the Moghul with the Empire of the Moghul's 3rd book Ruler of the World.

The first book is about emperor Babur's fate in India, the second tells the story of Humayuns struggle, the third recounts Akbar's live, the 4th turns around Jahangir's tale and the 5th is about shah jahan (Taj mahal) and his son Aurangzeb.

The books transport you back to 16th century India, when the moghul ruled the lands from beyond Kabul, Bombay to Calcutta.

The moghuls were descendants from Genghis Khan and Timurid and ruled their lands mostly wisely but also with a firm hand.

I completely loose myself in the Empire of the Moghul (mughal) book series each time again and again, they absorb my whole attention and I always learn something along the way.

The story is full of details and you have the impression that you are there or that these long gone times are about to manifest in front of you.

Although it's a fictional historical book, the authors made sure to keep it true to the historical facts, which makes the writing all the more precious.

My favorite parts in the books are the extensive description of the moghul feasts.

You get the idea how certain dishes came to be, that's when you take a peak into the soul of the ones who helped to define the food in this country.

You also learn that some food dishes might not have changed much after all.

A passage from the Empire of the Moghul, ruler of the worlds writes and I may quote:

... rosewater bubbled from the fountains in the courtyard where, seated on a golden chair on a velvet-draped dais, Akbar watched his guests feasting on the best his accomplished cooks could provide: whole sheep roasted on spits over fires of applewood, ducks and partridges stuffed with dried fruits and nuts and simmered in copper pots of saffron-spiced butter sauce, and chicken marinated in yogurt and spices before being baked in the searing heat of the tandoor - the portable clay oven used by a Moghul army on the march and brought to Hindustan in Babur's time.

As an extra touch of opulence, he had ordered loose gemstones to be scattered round the edges of the mounds of zard birinj - rice mixed with butter, raisins, dried cherries, almonds, pistachios, ginger and cinnamon - that were to be served to accompany the rich meats.

He had even commanded that fragrant musk-melon and sweet-juiced grapes be packed in ice and sent down through the Khyber Pass from Kabul.

The fruits had arrived two days ago in excellent condition. ...

I wish I could learn more about the food habits of the ones who lived aeons ago.

I also ask myself if the moghuls had discovered paneer for themselves because paneer korma is a mughlai shahi paneer dish.

The name indicated that one of the moghul emperors might have turned this firm cottage cheese back then into an empire-wide food trend.

I wonder how the cooks would have prepared it, maybe somehow close to my own recipe?

One thing I know for sure, my easy and quick paneer korma recipe is indeed a royal dish in my house.

If you have a hang for North Indian Food, then this is a dish for you.

The mild curry will enthrall your senses and perhaps you will be transported through time and space, to a period when Akbar (the great) ruled this country known as India today.

Dear reader, do you like to cook with paneer and have you ever prepared your own paneer form scratch? 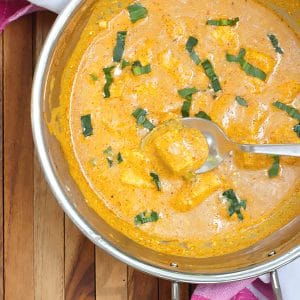