Helene D'Souza
Homemade Tikka Masala Sauce with cashews that comes together within 5 minutes! Plus point: it's healthier and vegan.
Total Time: 5 minutes

My favorite Tikka Masala Sauce is by accident vegan and so much tastier and healthier than the stuff you get in stores!

The freezer friendly curry paste can be used for various tikka masala meals.

What is Tikka Masala Sauce

Popular discounters such as Aldi, Lidl and other supermarket stores such as Walmart sell a jarred variation of Indian tikka masala sauce.

However, I say the homemade version is way better and totally worthwhile the 5-minute kitchen work! (That’s from someone who doesn’t like to cook but loves to eat!)

The normal Chicken Tikka Curry, served in most restaurants, is prepared with a tomato and cream based masala sauce.

The cream is kind of replaced by cashews resulting in a velvety, flavorful, texture-rich, healthier and filling tikka masala paste.

How to use this Tikka Masala Sauce

I got the idea for this cashew based masala sauce from one of our cooks (working at my husband’s family restaurant).

He uses his version of a spiced paste in all kinds of Indian dishes such as to prepare a Matar Paneer or a Butter Chicken.

Which I absolutely LOVE and I think they are way better than the regional variations.

Most Westerners agree because these dishes are rather popular.

You can use this paste the same way in a whole lot of dishes!

The paste is simply added to a shallow pan with oil, water and a protein or vegetable of your choice.

So, that means you can prepare a Chicken Tikka Masala recipe with this paste or a shrimp, tofu or vegetable version if you like.

I only use a handful of ingredients in my easy vegan tikka masala sauce variation.

Cashew seeds are the base of this Indian curry masala.

Blend together, cashews turn creamy and that’s what makes this sauce accidentally vegan.

Cashews add texture, flavor and compliment all the other ingredients in the sauce.

You can substitute Cashews with Almonds too but I absolutely recommend Cashews above all.

It’s just not the same with Almonds.

That includes Tomatoes, Onion and more or less Ginger and Garlic.

I use whichever flavorful tomatoes I can get and purple/red onions or shallots.

I add a set of ground spices to my easy tikka masala recipe.

I have tested a whole load full of variations but always came back to the same conclusion.

How to make tikka masala sauce from scratch?

To prepare your own tikka sauce at home is really easy and straightforward.

The fresh ingredients and spices are blend together to a thin sauce like paste.

Add all ingredients into your blender jar.

Peel the onion and with the tomato cut into quarters.

Add the cashews and, ginger garlic and all the spices.

Blend all the ingredients to a smooth sauce.

Use the sauce further in a dish such as to prepare a chicken tikka masala.

just add the sauce in a shallow pan with water and protein and/or veggies and cook till done.

How to store the Tikka Masala Sauce for another day?

I tend to freeze my masala instead of canning it and storing it in the fridge.

Which is a life saver if you are tight on time as I am.

In fact, you can just place it into your pan with some oil and water and wait for it to defrost completely over the heat so that you can add the other ingredients.

You can double or triple the recipe to prepare a larger batch.

Dear Reader, have you tried the Tikka Sauce? 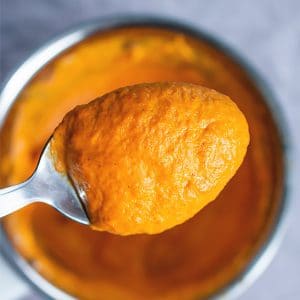