Helene Dsouza
Easy Chicken Tikka Masala with a handful of spices so that you can recreate this dish at home. This is my quick weeknight dinner meal. The tomato-based curry is low carb and a real comfort meal. Adjust the heat by adding more or less red pepper powder.
Total Time: 30 minutes
Prep Time: 10 minutes
Cook Time: 20 minutes
marinating (optional): 30 minutes
2 servings
4.89 from 18 votes
Jump to Recipe

Chicken Tikka Masala is a classic, spiced, tomato based curry.

This curry is for you if you enjoy dipping your warm naan bread in a creamy butter chicken curry!

After a long day at work, you just want to have a wholesome comforting dish to feed your hunger.

You want a dish that makes you happy, food which takes you over and which numbs your mind.

When this happens your smell, and especially your taste senses, go berserk.

📕 What is Chicken Tikka Masala?

A combination of spices are used to marinate the chicken before the meat is cooked in a gravy-like spiced sauce.

There are numerous claims from the British and Indian side.

I think the curry meal was made popular by Punjabi immigrants in the UK because chicken tikka masala is better known in the UK and not in India.

Hence why Chicken tikka curry masala is the national dish of England (I'm not kidding!)

People will claim that chicken tikka masala is Indian, but to be fair, it's not.

The dish rarely appears on Indian menus (and I traveled all over the country).

That is why this chicken tikka curry is a British Curry house dish, just like Chicken Balti and Chicken Pathia.

The Indian Chicken Masala is usually prepared with a nut (cashew or almond base) or tomato base and it's milder.

Besides they don't taste the same at all.

This is the major difference between the Indian chicken masala and the British chicken tikka masala.

YES, there is a difference!

I'm going to play the food culture police here and explain to you the major difference between these well-known creamy chicken curry dishes.

Chicken Tikka Masala and Butter Chicken are often while confused and that for a good reason.

I blame the Indian restaurant cooks for that!

The anyhow and no rule mentality/so-called progressive Indian cooking milieu is to blame.

The Tikka Masala Sauce is not limited to chicken.

Remember, chicken tikka masala is a newer dish and the rules are rarely set in that case.

That means you can prepare the same basic marination and the easy tikka masala sauce with other meats, such as:

I don't think beef, pork, goat and mutton are suitable meats in a tikka curry masala.

However, you can prepare the tikka masala sauce with paneer too!

Just follow the recipe below the same way as you would with chicken.

To prepare the chicken tikka curry masala you will need to work in 2 stages.

For the best chicken tikka curry masala: The longer you marinate the chicken the more flavorful it will turn out.

For the quickest chicken tikka curry masala: Marinate the chicken for 5 minutes and move on to cooking it.

I adjusted the recipe over the years to make it easier for you while retaining all the flavors.

I skip garam masala in my chicken tikka curry because, to be honest, you don't really need it.

The other spices with the yogurt add a lot of amazing complex flavors to your chicken.

Dear Reader, have you tried to make your own chicken tikka masala? 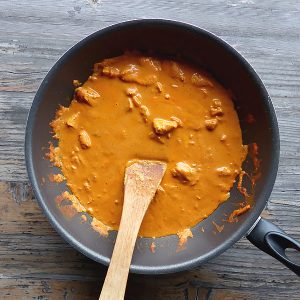 For the curry cooking: