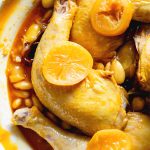 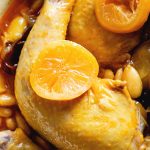 Make this Moroccan dinner recipe at home and learn how to use a tagine pot.

Tagine, or also Tajine, is an earthenware clay pot and also the name of a Moroccan meal that is slow-cooked in this traditional cooking utensil.

The clay pot consists of 2 parts.

A flat base rounded at the corners where the dish cooks, and a dome-shaped cover that sits on the lower part during the cooking process which is simply put the lid.

The specially shaped cover serves to circulate the condensation down in the cooking process.

Physics is doing an excellent job by cooking the meat extremely tender on the inside of a tagine.

The tagine meal is a traditional slow-cooked one-pot meal. It's great to serve this to a crowd!

There are a couple of different tagine types, in fact, Moroccan and Tunisian tagines are known to be two totally different dishes.

Since I have little knowledge of the Tunisian tagine, I'll focus more on the Moroccan Tagine dish.

I have tried Mutton Tagine, veg tagine, and chicken tagine in the past and our favorite is definitely the chicken version of this North African dish.

Other versions of this dish may include fish, prune and even oranges.

Using a tagine is actually quite simple. I'm going to clarify things here!

Find the complete recipe with ingredients and instruction details at the bottom of this post.

Marinate chicken and cook in the pan on all sides.

Assemble tagine by cooking first onion in oil in the tagine.

Add all the other ingredients including vegetables, dried fruits, chicken, preserved lemon and nuts.

Turn the chicken and ingredients during the cooking process.

We love our Moroccan chicken served with fluffy couscous, as it is the norm in Morocco.

Giant Israeli style couscous can be used as a side dish too.

Another idea is to serve your chicken apricot tagine with cooked plain rice or lemon rice or cooked ebly wheat berries.

Sometimes we serve roasted vegetables with our chicken tagine recipes such as potatoes, butternut squash, chickpeas and brussels sprouts.

To do it the traditional way, move the Tajine clay pot into the center of a table.

The cover is removed and everyone around the table starts to directly dip with three fingers into the warm dish.

The index finger holds a piece of flatbread and the thumb pushes the food onto the bread before eating it all.

The other fingers shouldn't touch the dish!

A while back I had mentioned in the Moroccan Tea experience, that Moroccan people follow traditional food and drink preparations to the T.

Old traditions have been preserved over time and were passed over to the generations.

What are some of the most common flavors giving ingredients in a tagine?

Tagines may include apricots, dates, prunes, almonds, pickled lemons. Aromatic spices such as paprika and cinnamon are added for flavor.

What wine does with a chicken tagine?

We usually serve white wine or rose with our chicken tagine. A fruity rose makes a great addition. Moroccan wines are surprisingly fruity aromatic and perhaps worth a try with this Morrocan chicken tagine. 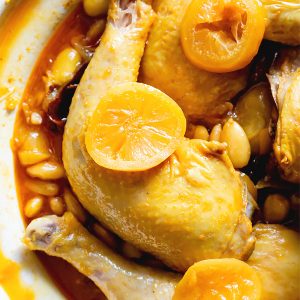 For the Seasoning and Chicken:

For the Seasoning and Chicken: