Helene Dsouza
Homemade coconut milk is often used in curries and sweet dishes but it can also be used in beverages.
Total Time: 10 minutes
5 from 2 votes
Jump to Recipe

Those are still rather a rarity in the Austrian alpine villages but at least some super markets tend to have those in display.

However, commercially available coconut milk in Europe kind of tastes strange and even my mum agrees.

One fine day we had a Skype call so I can teach her how to make homemade coconut milk from scratch.

After that call, I figured it was about time to just simply post it here.

A feeling of guilt usually creeps in when sharing such basic recipes.

But nothing beats making these basic recipes with fresh ingredients rather than using store-bought ones prepackaged ones.

I thought it would be nice to have all these simple everyday recipes all in one place.

I am not sure what you guys would call them.

Maybe DIY recipes, or basic recipes or primary recipes, any of those titles sound appealing?

Anyway, a few months back I created a pinterest board called Basic recipes.

I keep basic recipes such as homemade ricotta cheese, vanilla sugar, almond milk, homemade butter, homemade rosewater and so on.

The board should give you an idea what I mean, do check it out.

Back to the Coconut milk.... Did you know making homemade coconut milk is super easy?

You just need two things, an electric blender/mixer and some fresh coconuts.

To find a fresh coconut might be a challenge for some.

You can always check your local grocer, or any Asian markets that are near by.

Once you have your coconut you will have to split it into two.

The easiest way to do this is with a big chopper (not kidding!).

Locals in Goa sit on a special coconut scraping stool with a chopper/knife thing attached to one end so to scrape out the coconut easily.

That's how they do it here in the tropics, but I figured you might not be able to do that at home.

Here you will find useful coconut breaking and scraping tips.

How to make coconut milk?

Once you have scraped your fresh coconut into small pieces, blend it with some water to thick milk-like consistency.

Strain the precious homemade coconut milk and place the strained coconut mash back into the mixer with some more water.

This reduces wastage and you can get the most out of the coconut.

Repeat the straining process once more.

After that you can discard what is left from the coconut.

You can use you fresh coconut milk straight away or store it in the fridge for further use.

This was easy right?

Coconut milk is often used in curries and sweet dishes but it can also be used in beverages.

Sometimes I just mix some sugar into the coconut milk and drink it just like that.

You can also add a pinch of cinnamon powder to it which transforms the homemade coconut milk into a special indulgence. 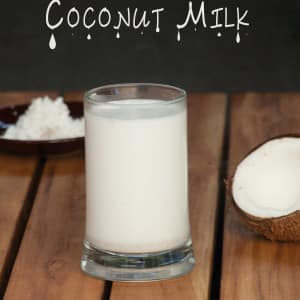