Helene Dsouza
Crispy light and fluffy waffle recipe made from scratch with basic pantry ingredients. Enhance the dough with vanilla essence or orange flour water or skip the sugar to make this waffle recipe a savory meal! So that the waffles turn fluffy add baking powder, and follow the technique to separate egg yolk and white to beat the egg whites to a snow.
Total Time: 25 minutes
4.86 from 7 votes
Jump to Recipe

The Fluffy Waffle Recipe is a classic and usually, my mum used to prepare waffles the French way once in a while as a special dessert afternoon treat for us.

Nowadays light and crispy waffles are one of my favorite brunch meals.

To make fluffy waffles is not rocket science there is a great technique to create gorgeous waffles every time again!

My mum and my sister recently gifted me a waffle maker (with exchangeable plates to make paninis as well and other goodies) and yes since then I have been making a lot more waffles again.

How could I have lived without waffles all this while!!

Mother's day is coming up and because I won't be able to prepare my mum the traditional brunch she deserves, I  will dedicate this fluffy waffle recipe post to her. 🙂

The Fluffy Waffle Recipe is pretty much the way she used to prepare it for us kids back then, however, I did take inspiration from this French cooking website because all my waffle recipe creations (which I secretly prepare when you guys are not around) are based and adapted from this recipe.

Must of us know what waffles are and where they come from but for those who don't, here some more info in a nutshell.

Waffles can be prepared with a dough similar to pancake and crepes (some people use the same dough) or with a yeast dough.

There are countless variations of waffle doughs, and this often while depends on the region of origin.

What makes a waffle a waffle, is that the dough is pressed and cooked between two hot plates.

So, while we wouldn't have recognized the waffles of the renaissance period, nowadays waffles have a distinct brilliant design which makes them stand out from afar.... the honeycomb waffle shape!

The honeycomb waffle shape doesn't only look great it has a practical use.

While the dough is pressed together and cooked between the metal plates the leavened tough is forced to expand in the heat in the squared space.

This results in the lovely exchange of crispy and soft textures when we bite into a cooked waffle!

The Belgians are most famous for their countless amazing waffle varieties but the French, of course, have their fair count of waffles as well, although french waffles are based on the regular fluffy waffle recipe.

To make waffles you will need common pantry ingredients.

As you can see flavoring is an option.

I rarely add flavoring because I like my waffles plain, sometimes waffles can be enjoyed also with savory ingredients such as poached eggs.

This is something I  leave up to you if you want to flavor your waffles or not.

We will focus on how to make perfect fluffy and light on the inside but crispy on the outside waffles on the waffle maker!

How to make fluffy waffles?

To prepare fluffy waffles you will need a waffle maker.

This is an essential tool because the waffles turn out amazing in the honeycomb shape, resulting in light airy waffles with a crispy crunchy outside.

Then get all your ingredient together and keep everything ready before you get into the preparation mode of your waffle dough.

To make the waffle dough from scratch, start out by separating the egg yolk from the egg white.

This is our main step here and the special technique in creating the fluff that we need in our waffles.

Keep aside the Egg yolk and focus first on the Egg white.

Beat your egg white with the hand mixer until you have a stiff egg white snow.

It helps to beat egg white in a cold bowl so that it stiffens easily.

Add sieved flour (so that no lumps appear), powdered sugar (to mix in easily), a pinch of salt and baking powder to the egg yolk in the bowl.

Continue to add in the molten butter (make sure the butter is not hot) and add some of the milk.

I  like to work with a hand mixer to create a smooth dough.

Do that and add the remaining milk and any flavoring and mix into a smooth dough so that no lumps are left.

Keep aside the first part of the waffle dough.

Last step, add the stiff egg whites to the other dough part and fold in the egg whites.

Do not mix! Mixing would destroy all the air from the stiff egg whites.

If you carefully fold it in only half of the airiness will come out, that's alright.

Heat up your waffle maker and wait for it to be super hot.

Then pour in a ladle of the waffle dough and close.

Cook until the waffles turn golden and crispy.

How to serve this fluffy waffle recipe?

In France, waffles are served with sugar most of the time.

That's the most basic version of how waffles are served and that way waffles have been mostly enjoyed as an afternoon coffee time dessert treat.

I can't tell you about Belgium because I honestly don't remember.

It has been a while since I  visited this corner of the world...

Of course, the more indulgent folks will like to serve the waffles with ice cream, syrups, maple syrup, whipped cream, you name it!

Frequently waffles can be also served as a savory brunch treat.

In that case, you could omit the sugar in this recipe (although sugar is really not a bomb in this fluffy waffle recipe) and add some fresh rocket leaves a sprinkle of pumpkin seed oil and a poached egg placed over the "nest" and the honeycomb.

Tools that you will need to make this fluffy waffle recipe:

Dear Reader, how are you planning to serve your waffles? 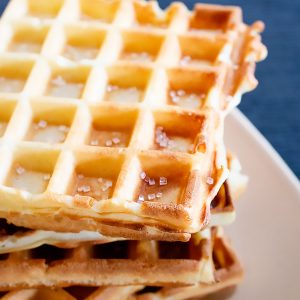