Helene Dsouza
Cheesy over crispy fried onion, slices of cooked potatoes and eggs. Simple seasoning but bursting with authentic alpine Tyrol flavors! Originally the one pan skillet recipe includes lard pieces, so to make this a non-veg recipe just add lard (or bacon if necessary) during the frying process. Often while leftover cooked potatoes from the previous day are used to prepare this skillet meal, making this a perfect dish to reuse leftovers!
Total Time: 25 minutes
5 from 4 votes
Jump to Recipe

Cheese Eggs and Potatoes Skillet is a meal in itself which we commonly prepare in the Austrian Alps.

Slices of potatoes are fried in the skillet with eggs and sprinkled with cheese to create a comforting and easy to prepare meal.

This is the right lunch or dinner for you if you are looking for a one-pan comforting easy to prepare recipe.

Further below I share how to prepare cheesy eggs and potatoes in the skillet with my video.

Where did this eggs and potatoes dish originate?

Eggs and Potatoes skillet covered in cheese is a typical dish from the Austrian Alps.

We grew up having this at least once a week for lunch.

The cheese potato dish is somewhat related to the Cheese spaetzle dish.

While some people might call this a breakfast meal in the US and UK, we in Austria and Bavaria call this a lunch or dinner meal.

For breakfast, we tend to have bread with butter, honey, and jam.

Some of us enjoy muesli or cold flakes or oats in milk.

Cooked meals are not a common thing in central Europe.

Yet we go crazy over our eggs and potato meals during the rest of the day!

Some hotels in the alps have taken a fancy to serve sliced cheesy potatoes and eggs as an afternoon snack with coffee and cake.

Ultimately it's up to you how you enjoy this amazing tasting simple but classic meal!

Potatoes over the centuries in the Alps

The potato was early on adopted into food culture and became quickly an important ingredient for farmers in central Europe.

The same thing came to be in other countries in Europe.

Notably in Ireland where the forced dependency of potatoes destroyed families as the crops failed and the people succumbed to famine.

The potato in Austria, Germany, and Switzerland, in fact, turned into a major food ingredient as it was and still is inexpensive.

Before - and I am talking here about the time before the year 2000 - most of the homes had a potato garden, where various potato varieties were planted.

Potatoes would be stored over winter as well, just the way we would store apples, pears and prepare and keep Sauerkraut.

No wonder, that we even include potato in our doughs to make noodles!

One of the most common potato dishes in the alps amongst the farmer families is the Eggs and Potatoes Skillet meal.

A huge pan would be prepared and could include the following ingredients:

For my fried Eggs and potatoes recipe further below, I use all these ingredients except the lard because I prepare it most of the time without lard anyway.

However, you may want to add some lard to your one pan potato skillet.

When farmer families would prepare this potato skillet, they would prepare it in a big skillet and serve it in the same skillet by placing it in the center of the table.

Most of the time the potatoes would be overly fried crispy and almost black in color.

Every member of the family would then take a soup spoon and enjoy the pan meal together.

This kind of serving and eating a meal practice is still commonplace in some parts of the world such as the Maghreb (Marocco etc).

How to make Eggs and Potatoes skillet?

Serve the Eggs and Potatoes Skillet with a plain green lettuce salad and a simple oil and vinegar marination.

Also, black bread goes well with this lunch meal and you can also enjoy a proper beer with it.

Useful tools to prepare potatoes and eggs in a skillet

To make this satisfying delicious potato meal at home you will need a good skillet.

In older times they would use something like a cast iron skillet (and today these pans are popular again!) and it does make sense to use and have one because they are sturdy and they give you the option to slide the pan into the oven to cook food further.

Yet, cast iron skillets are heavy and you will need more oils and fats to keep the food sticking from it.

In that case, a lighter PFOA-free non-stick skillet can be helpful.

Sliced potatoes have a tendency to stick so if you don't want to deal with that, then the non-stick pan is your friend.

In that case with a non-stick pan, always use a wooden spatula to not scratch the pan.

I love my light bamboo spatulas!

Most probably you must have noticed and seen mine in my videos.

Your third pan option would be to use a stainless skillet.

Those are sturdy, not too heavy and are a great compromise between cast iron and non-stick pans.

So if you want something solid where you don't want to worry about harmful non-stick surfaces, then stainless steel is your thing to cook the sliced potatoes crispy.

Dear Reader, what time of the day would you like to enjoy these Eggs and Potatoes Skillet? 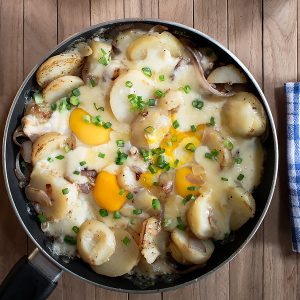