You know noodles and pastas?

But do you know noodles made of Potatoes?

Many of us might not, since Potato noodles are mostly common in middle Europe and for some reason they didn't make the globalization as did the Italian pastas.

Our Ancestors weren't so keen on sharing the recipe much either, they lived and died on their lands and passed their "secrete" recipe to their children and they passed it on too.

I am not one of those children, but I had a great teacher in college who passed her family recipe to, you should guess it,  me!

I am the kind of social person who loves to share and educate fellow online surfers and so I present you today the delicious Potato noodles in a sweet dessert version which you wont be able to resist!

All this while I have been reserving this recipe in my box.

Yes I have a box, and its not a small one and its not filled with just any but only with the creme de la creme, my favorites and the most unique recipes.

Some have been of course already presented in this space and a looots more are to come in the future.

Potato noodles have some history in Austria's and Germany's past.

For those who still don't know it, Austria and Germany are 2 totally different countries, yes we share a language but even that is very different.

Northern German's can"t understand Austrians who originated from the mountains, so the language is kind of out too.

What we do share is, lots of history of course and the most famous delicious dishes out there in the world!

Troops would mix flour and water together to form the dough into long  fat noodles.

In that time Potatoes were unknown to the locals.

Only in the 17th century, when potatoes started to be cultivated in middle Europe, potatoes were added to this dough and different variations in different regions became slowly popular.

In many parts of middle Europe it is served as main dish or as a side dish.

We in Tirol serve it as a sweet version for dessert.

Anyhow it tastes yum and its the perfect comfort food.

I am sticking to the sweet poppy version today since its such a eloquent dish and I could explain for hours all the different versions and uses of this particular noodles.

The concentration here is on the potato dough, a dough which can be used in many ways to obtain different dish results, which I ll elaborate in the next months here on Masala Herb.

This time I used Sweet Potatoes in this recipe instead of normal Potatoes, but you can use the latter as well instead.

I suggest you bookmark this potato dough recipe since its one of the main base dough recipes out there and I promise, you will need it sooner or later!

This is an other traditional Mehlspeisen recipe such as Spätzle and Knödel. 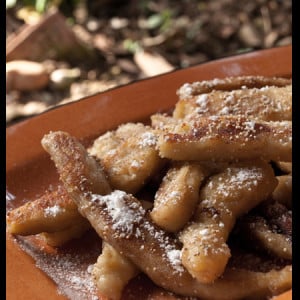 for the Potato dough:

For an extra eye efffect add dark poppy seeds instead of the light ones. I couldnt get dark ones and so had to use the light poppy seeds..
Made this? Get featured!Mention @real.masalaherb or tag #masalaherb!
« Natural Marzipan Candy with Honey Recipe [Easy]
Wheatgrass Shot »
7 shares