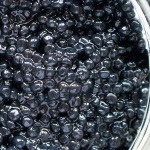 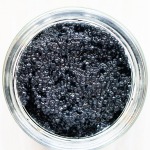 Everything you need to know about seaweed pearls aka vegan caviar.

Vegan caviar is a type of vegan gourmet food that mimics the look and feel of fish roe. It's a sustainable plant-based alternative to fish caviar.

It is usually made from seaweed or seagrapes, and it can be used in many dishes or eaten on its own.

We will mainly focus on the seaweed version here, seagrapes look very different.

Seaweed pearls are the latest trend. You can even get them in Ikea, where they are known as SJÖRAPPORT.

It costs a few dollars and it's available in all Ikea stores, so it is definitely affordable!

The ones that you can purchase are usually black or orange seaweed pearls.

They are made with gelatin. That means for them to be vegan they use agar-agar, an alga known to be a good gelatine alternative.

Seaweed Pearls taste salty and like the sea. It's definitely nothing like real caviar or other fish roes like tobiko, but it does taste great too.

Vegan Caviar is used in many dishes, such as appetizers, side dishes, and entrees.

Basically, you can use it in exchange for regular caviar. Just switch out the fish eggs for this vegan alternative.

It's a budget-friendly option that looks good. I don't think it's just for vegans. I'm a flexitarian and I like them too!

When it comes to storing vegan caviar, you should keep it cooled in your fridge with minimal exposure to light.

Check the best before label on the jar to know for how long it is good.

If you want to maximize the shelf life, you could freeze them too. To thaw them, keep the jar in your fridge overnight.

How is it better than caviar?

Vegan caviar is not real caviar, it's an imitation made with alga (something that we have in masses on earth). Authentic caviar is fish roe, which is taken from the female fish. This practice has been connected to animal cruelty and the demand has kind of made it worse over the years. This is when some smart people got the idea to create a vegan, more sustainable option. It looks the same and tastes almost the same.

Vegan caviar is more bouncy and that's how you know there is vegan gelatin in it. Real caviar will pop in your mouth, letting a beautiful stream of flavors take over your taste buds. This is definitely something that I'm missing when eating vegan caviar. I also think that real caviar is smaller in size and perhaps a darker black. That said, vegan caviar makes a great alternative and it can only get better in the future.

Where to get vegan caviar?

I have seen them appear in grocery stores in Europe. They are right next to the real deal caviar and fish roes or sometimes they keep them on the vegan shelf. That said I discovered it mainly via IKEA, although theirs is of moderate quality. You can also get pearl seaweed online.