Helene Dsouza
Potato Gnocchi are prepared with mashed potato, flour salt, and an egg. A dough is formed and then further cut or shaped into Gnocchi dumplings. I give you 3 options to shape your Gnocchi (see video and post). Water is boiled and the gnocchi are cooked in the boiling salt water until they swim on top.
Total Time: 1 hour 10 minutes
Prep Time: 50 minutes
Cook Time: 20 minutes
4 servings
4.84 from 6 votes
Jump to Recipe 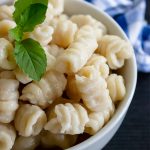 Besides, it's not rocket science to prepare these pasta dumplings from scratch and they taste way better then the store bought Gnocchi.

📕 What are Potato Gnocchis?

Gnocchis are Italian pasta dumplings which originated in the North of Italy.

Potato Gnocchis are the most well known Gnocchi variation out there.

Most of the time when people talk about Gnocchi, they mean potato gnocchi.

Most of the potato gnocchi dough is made out of mashed potato.

The other ingredients include flour, salt, and egg.

Potato gnocchi are also a local dish in neighboring Austria, Croatia and even Bavaria (Germany) where they are known as Nockerl or Nocken or in Croatia as Njoki.

Gnocchi from the north of Italy resemble the elongated Potato Noodles (aka Schupfnudeln) from the German-speaking countries.

🔪 How to make Potato Gnocchi?

To make homemade Potato Gnocchi you need boiled Potatoes turned into a simple mash, flour, salt and an egg.

Making Potato Gnocchi with potato dough is really easy and if you try it first, you will realize that the homemade gnocchi tastes way better then the store bought gnocchi.

To make your life easier you can use a kitchen machine to prepare the dough.

I still work the classic way by hand so even if you don't have the machine, it's not that much of work to prepare the dough.

You just need to work it out until you have a smooth potato dough. 🙂

Once your dough is ready you need to shape your Gnocchi.

These are your three options to shape the Gnocchi:

I personally prefer the rolled over fork gnocchi because I prepare a cheese sauce (recipe coming soon) and the sauce tends to go between the fork rills of the gnocchi.

For some reason that tastes better because I guess the sauce is better distributed that way.

My Indian husband taught me the rolled over fork Gnocchi version because he used to work for an Italian themed restaurant in the Himalayas.

This was the exact way they would shape the Gnocchi by rolling the dough over the back of the fork.

His trick is to oil your fork so that the dough rolls over easily.

That way they would prepare huge amounts of Gnocchi daily.

When I am in a hurry I make the simple pillow shaped gnocchi.

I used to work in a Gelateria in Austria run by an Italian and my boss would prepare fresh Gnocchi at times for lunch.

He would shape them the simple way too because, well, he has a business to run too!

The Fork pressed version is common in Austria for some reason.

In Italy, they also have a board with rills to make the rilled design for the Gnocchi.

It's called a Gnocchi stripper and it's made of Birchwood.

Once the Gnocchi are shaped, keep a large pot to boil with salt water.

When the water is boiling, simply add the Gnocchi one by one to the pot.

Just wait for the Gnocchi to swim to the surface and then simply take out your Gnocchi.

You can then simply add the Gnocchi to a frying pan with butter and parmesan, or you toss them through a cheese sauce or another option is to let the Gnocchi cool and to freeze them.

That way you have Gnocchi which just need to be defrosted to be enjoyed in a meal.

Dear Reader, where did you try your first Potato Gnocchis? 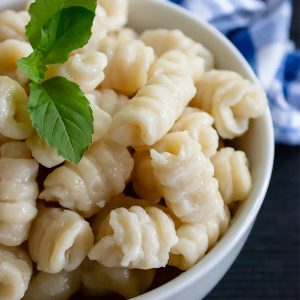 Potato Gnocchi are prepared with mashed potato, flour salt, and an egg. A dough is formed and then further cut or shaped into Gnocchi dumplings. I give you 3 options to shape your Gnocchi (see video and post). Water is boiled and the gnocchi are cooked in the boiling salt water until they swim on top.
4.84 from 6 votes
Print Pin Rate
Course: Main Course
Cuisine: Italian
gnochi, italian dumplings, potato dumplings, potato noodles
Prep Time: 50 minutes
Cook Time: 20 minutes
Total Time: 1 hour 10 minutes
Servings: 4 servings
Calories: 315kcal
Recipe by: Helene Dsouza