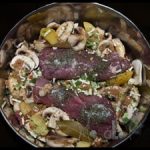 This is my first pork dish here., and it has been a while.

It is very rare that I cook pork at home and in general its not a meat which everybody enjoys.

I myself, I am quite difficult and choosy when I cook and eat pork

Nowadays I have seen more useless cuts of pork meat around than ever before.

Another factor is the fat content, and I am the type of person who detests chewing for minutes on a wobbly piece of fat.

Surely I am not the only one who thinks like that.

A small trip to the Mapusa market some time back enabled me to come across a beautiful, tender, boneless, lean piece of pork fillet

This cut of meat is also known as pork tenderloin.

This part of the pig is one of the most prized and valued by cooks all over the world.

I found a nice picture in the wikipedia/wikimedia archives which describes where the different meat cuts are situated.

The Pork fillet is situated in the center, here described as number 8.

The pork fillet with potatoes and mushrooms recipe was passed over by my mum several years back.

This recipe is quite simple and quick to prepare, you just have to be careful that you don't over cook the meat!

Trust me, it is easy to overcook pork

The flavors can be described as homely and warming.

My husband loves this dish for its simplicity also because it reminds him of Austria.

Since I am off to Europe soon, leaving him behind thought I'd whip him up some of these delicious pork fillets.

I had promised a write up some time back, on the Tiracol Fort in Goa.

Here are some facts about this barely known Goan heritage building.

Tiracol, also known as Terekhol, is situated at the far northern end of Goa, right next to the neighboring state of Maharashtra.

The fort is isolated and to reach this magnificent place one can board a ferry.

Tourists are few and far between, and you can spot a handful of people through the hills, as I had mentioned here.

You have to imagine it took me 5 years to decide to finally check it out and I am glad that my husband took me.

The fort is classy, peaceful, and has a gorgeous view, which you cannot miss.

Thought its been turned into a heritage Hotel, anybody can go in and check the fort out.

The Fort was built in the 17th century by a Hindu maharajah (king) and later forcefully taken over by the Portuguese colonialists (More about the story here).

Wondering what's in the Trunk or what used to be in it.

The St. Andrew church isn't open to the public, unfortunately.

You can walk down to the the cliff shores and chill there...

... or you can sit on top and get a drink or two and enjoy the wonderful view.

Looks majestic and ancient - "A Saudosa Memoria" in Portuguese and Konkani.

The way back we found some green fields. Green fields in April/May, in Goa! 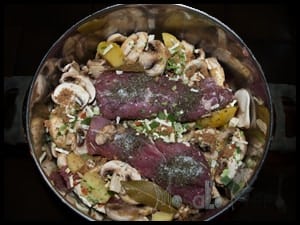 Pork fillet with mushrooms and potatoes