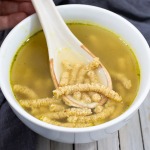 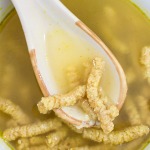 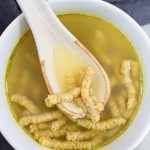 Passatelli in brodo (in clear soup broth) is a regional Italian food specialty.

Passatelli is an Italian regional pasta specialty, that originated in the province of Pesaro and Urbino.

The dish is a specialty from Emilia-Romagna but it appears all over northern Italy. We had it in Venice too.

The reason why this pasta variety is so special is that the pasta dough is made with bread crumbs instead of wheat flour.

The mass is enriched with parmesan, grated lemon zest, and nutmeg. That is then pressed through a potato ricer into a simmering clear broth.

Traditionally they would use a so-called Passatelli iron tool but a potato ricer with large holes does the trick too.

The Passatelli cook in the broth and turn into pasta-like elongated shapes.

This dish is also known as Passatelli in brodo (brodo means broth).

Other new-age variations have been popularized in northern Italy by chefs. The passatelli are served like pasta with mushrooms or seafood.

To prepare "dry" passatelli, without soup, you would have to cook the passatelli in boiling water.

This passatelli recipe was shared and filmed with my friend Susanna. She is originally from Trentino, northern Italy, and she runs an Italian restaurant in Goa, India.

All the US and metric measurement details are located further below, this is just an overview to help you get organized.

You will also need a soup broth. You can make your own vegetarian broth or you can use commercial ones such as maggie cubes dissolved in the cooking water.

In Italy, they tend to use chicken or beef broth. Fish broth is another variation over there.

The process is very straightforward. It's a simple ad easy from-scratch recipe.

You will find all the details further below in the recipe card. This is a quick summary.

Combine the passatelli ingredients in a bowl to a well combined, non-sticky mass. It should just hold well together.

Wrap the mass into a cling wrap and cool it for a minimum of 30 mins in your fridge.

Press passatelli mass through a potato ricer, so that the passatelli falls into the cooking broth.

Cook passatelli until they swim on the surface of your broth.

Take from the heat and serve passatelli in brodo hot.

The passatelli soup is served as is, hot on a cold fall or winter day.

It makes for a lovely soup the rest of the year too because of the lemony flavors.

Italians like to sprinkle some parmesan over the soup as a garnish.

You can also sprinkle fresh cut chives or parsley over your soup before serving it up.

This soup can be added to your meal prepping menu for the week.

Just prepare the passatelli in broth and store it in glass containers and a lid in your fridge.

It will be good for at least 5 days if stored in your refrigerator.

You can freeze the soup with the bread crumb pasta pieces. Prepare it as per directions and just freeze it in batches in a freezer-friendly container.

Keep in your oven or microwave to thaw and warm up when you want to eat it.

Why is my passatelli mass stone hard and difficult to press through the potato ricer?

That's normal, you will need some muscle power to press the dough through the potato ricer. I also recommend using a quality potato ricer. Apply your physics knowledge here and press down at the handle ends, and you will see it will be easier. It also helps to keep the mass out for 2-3 minutes, after it has cooled in the fridge, so as to "warm it up a bit. But don't keep it out too long because soft passatelli mass increases the risk of the Passarelli's breaking in the broth during the cooking process.

Can I make this without lemon zest and/or nutmeg?

Theoretically yes but the dish will be missing flavors.

What if I don't have a potato ricer to make Passatelli?

You can use a spätzle press too, the same tool that you would use to make Spätzle from scratch.

How can I make passatelli without a soup broth?

Press the passatelli mass through the potato ricer into boiling hot salt water and cook them the same way you would cook homemade pasta. Strain and use with mushrooms, seafood or a sauce of your choice.

What does Passatelli mean in Italian?

Passatelli means to pass through. As in the sense of the pasta passing through the potato ricer. 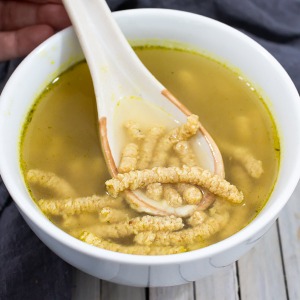 32 fl oz broth = 4 cups and that's about 950 ml (almost a liter). Liquid broth comes in 32 fl oz packs in the US and in 1 liter packs in the rest of the world, so I made the conversion easier for your region.