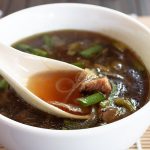 Japanese Onion Soup with mushrooms can be enjoyed the whole year round.

This light Japanese soup recipe is based on the hibachi soup and prepared with a clear broth, onion, spring onion and shiitake mushrooms.

Further below I share how to make this gorgeous Japanese soup recipe with a video and recipe to print.

📕 What is the Japanese onion soup with mushrooms?

Japanese onion soup with mushrooms is a common soup served in hibachi restaurants across the North American continent as a starter meal as the soup is a clear broth and light onion soup.

The purpose of the soup is to prepare the stomach for the rest of the meal to come, which is usually heavier in nature and contains meat such as beef steaks.

Hibachi Steakhouse has all their take on this soup, with some establishments skipping the mushrooms all together to make it more like a french onion soup (minus the cheese and flour).

Yet, the Japanese onion soup is not a miso-based soup but uses a beef broth instead.

You will love this Japanese onion soup if you are not a fan of miso soups or if you like light Asian inspired meals which have a western touch to it.

🍄 Ingredients for the Japanese onion soup with mushrooms

I like to use white soft tender onions for this Japanese onion soup.

So, instead of using one large onion I tend to use 3 smaller tender young onions because the flavor tends to be more delicate.

Then, of course, spring onions are another major player in this Japanese onion soup.

For the mushrooms, I always use shiitake mushrooms because of the flavor they give to the soup.

You can use button mushrooms in this clear soup, but it won't be completely the same experience.

Besides I use dehydrated shiitake mushrooms because they can be stored for a longer period of time and because I get it form a Japanese traveler from Osaka who sells, every year again, a load full during December.

Those dried shiitake mushrooms are gold worth and enhance a soup or meal immensely!

If you plan on using dried shiitake mushrooms in this soup instead of fresh ones, then you can do the following:

Besides that, you will also need a clear broth.

I found that a clear beef broth is the best choice but you can also use a vegetable broth or if you prefer, a chicken broth.

Ginger, Garlic, Soy Sauce and Black Pepper are added into the soup as well and shouldn't be skipped.

Dietary application for the Japanese onion soup with mushrooms

🔪 How to make Japanese Onion Soup with Mushrooms?

To make this one-pot Japanese onion with mushrooms is actually rather easy and quick as well.

To prepare the ingredients will take up about 8 minutes of your time.

Cooking the soup takes about 20 minutes all together just leave the soup to simmer slowly once all the ingredients have been added.

Start by keeping all your fresh ingredients ready before you get cooking.

Slice your onion and keep aside

The white bulb is simply sliced and added to the white onion.

The mushrooms are cut small as well and the ginger and garlic are chopped small.

Heat up a pan and add the oil and sliced onion pieces.

After that add the ginger and garlic and mushroom before pouring in the beef broth and water.

Check if the soup needs salt, mine didn't need any salt.

Then you are just left with adding the green onion pieces to the soup as a garnish and serving the soup hot in bowls.

The soup goes really well with the main course such as a beef steak.

I wouldn't hesitate to serve the soup with western food too because the flavors are quite universal.

Dear Reader, how are you planning to enjoy this Japanese onion soup with mushroom? 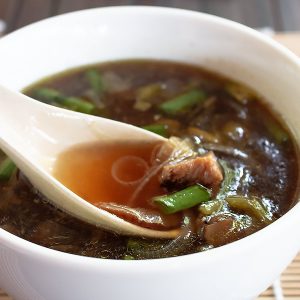