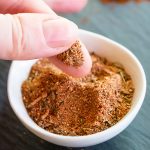 Homemade Cajun Seasoning is a spice blend which can be used in so many different ways in your food.

The seasoning is slightly spicy but also enhanced with a fresh herbal aroma, making it a great all-rounder spice mix in your kitchen.

The fresh diy Cajun seasoning recipe is a keeper and quickly prepared in less than 3 minutes with common household spices.

📕 What is Cajun Seasoning?

Cajun Seasoning is a spice & herb blend and defines local cuisine of the region of Louisiana in the south of the US.

The Louisiana cajun recipe includes local ingredients from the region.

Common French ingredients such as celery make an appearance, as well as hot soulful spices such as hot peppers.

French settlers had come to that area and brought along their know-how and developed the cajun seasoning in time with the knowledge, given to them by the local native Americans, on certain locally available ingredients.

One such ingredient (in the original cajun spice blend!) is the so-called filé powder which is a leave turned into powder from the sassafras tree.

The sassafras spice is fresh and earthy, and kind of licorice and it is a super useful thickening agent for sauces and roux.

Unfortunately, this spice is very hard to be found because other tree parts, such as the roots, have been misused in certain ways by humans.

Therefore, most Cajun seasonings do not contain filé powder these days (except in the Lousiana area) and hence people came up with a flavor replacement by mixing dried thyme and savory herbs.

which mimics the aroma of cajun spice.

Cajun vs Creole Seasoning and cooking

Both, Cajun and Creole Seasoning, originated from the same corner in the world, they are very similar.

The difference between Cajun and creole seasoning is that Cajun cooking is known as a country style cuisine while Creole is associated with New Orleans or generally speaking with the city style cooking.

Cajun seasoning seems to carry more heat compared to the creole seasoning although both use the same local ingredients.

However, Cajun is mostly associated with the former French settlers who were driven out from Nova Scotia when the British took over.

They resettled in and around New Orleans in Louisiana (US) and brought along their cooking which is known as Cajun today.

Creole is more subtle but well balanced, yet Creole cuisine was influenced by various cultures besides the French, the African, Spanish and even the Hindus who had settled around the Carribean.

Yet, there are actually countless different creole variations in an around the Caribbean, Brazil and other tropical countries in that corner of the world.

This hot and interesting food history topic was gathered from my food bible, the Larousse Gastronomique.

At the same time, I am quite convinced only a local from that area who has grown up with that food will be able to articulate more differences between Cajun and Creole seasoning and cuisine.

We spoke about the filé powder further on top and that the sassafras leaves where hard to come by so that most homemade cajun seasoning's ingredients were modified.

To make a modern Cajun seasoning you will need the following ingredients.

You should have the spices and herbs in your pantry right now, or most can be bought easily as well.

If you have filé powder (aka Sassafras leave powder), then use it instead of the thyme and savory, 1:1.

Turn this into a salt free cajun seasoning by just skipping the salt in the spice mixing process.

🔪 How to make Cajun Seasoning from scratch?

To make the homemade Cajun seasoning from scratch is super easy!

There is always an easy and quick way to make a spice blend or there is also a way to make the best cajun spice recipe.

Which one you pick is up to you! Both have their advantages.

How to make an easy and quick cajun spice mix?

Those spices are placed into a mixing bowl and just blend together with a spoon.

This technique is useful when you need a quick and reliable cajun seasoning which is homemade and time-saving as well.

I suggest you make a small batch of the cajun spice mix with the quick preparation method and use it all for whatever you are planning to cook that day.

How to make the best cajun seasoning?

To make the best cajun seasoning recipe you would need much more time on hand and patience as well.

This is something you should do for a larger quantity of cajun spice blend.

It involved drying your own spices and grinding them small.

Hence, while you could sun dry the chilis and herbs, you could also dry the onion in the oven on the lowest heat setting for a period of over 60 minutes.

What you choose to do is up to you.

It's time-consuming but well worth it.

Make sure to use only quality ingredients for that method of preparing the best cajun seasoning.

In fact, if you grow your own celery and peppers then preparing your own spice blend from zero should be in your game plan.

This is how it's usually done in real life, in the countryside.

Drying the spices and herbs in the sun and air is my preferred method because time can create flavors in our food as well.

🧰 Useful tools to make your own homemade cajun seasoning recipe:

Traditionally Cajun seasoning is used as a browning on ingredients. The dry spice blend is rubbed on meats before grilling or dry pan frying until the ingredients are almost black.

As you can imagine blackening spices on meat must be very effective on fatty meats such as pork or even fatty fish!

Another way of using cajun spice is in stews with pork fat and a brown roux. Local ingredients from the New Orleans area such as crayfish are commonly used that way in dishes such as the Ettoufée.

However, these days we have all acquired a taste for Cajun everything. So, anything can be turned into a Cajun dish with this homemade cajun seasoning.

Try adding the Cajun Seasoning to:

Dear Reader, how are you planning to use the cajun seasoning in your cooking?

Do you like homemade seasonings? See some more DIY spice and herb blends to make at home! 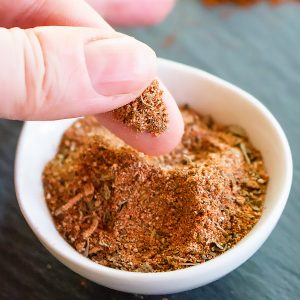 The Cajun Seasoning is the basis for many traditional Cajun meals such as in Etouffée, jambalaya, and gumbo. Yet you can use the homemade cajun mix in other meals such as in creamy pasta dishes, on meats as a rub, in rice and vegetables.
4.75 from 4 votes
Print Pin Rate
Course: Condiment
Cuisine: American
cajun, spice blend, spice mix, spices
Prep Time: 3 minutes
Total Time: 3 minutes
Servings: 2 Tablespoons
Calories: 10kcal
Recipe by: Helene Dsouza