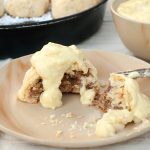 Buchteln are sweet baked buns. This recipe is with a hazelnut filling and it's from Austria.

Buchteln are sweet yeast rolls with a filling.

These sweet Buns are stuffed with jam or sometimes even with other surprises such as Topfen (fresh cheese) or even nuts.

You will find this traditional dish all around the alps in the heart of Europe but often you might not be able to recognize it in a menu because of the many names it is known for.

We Austrians in Tyrol and other parts of Austria call them Buchteln and I believe the South Tyroleans in Italy know the sweet buns by the same name.

However, originally it appears that the Buchteln were created in Bohemia ( Czech Republic) and are known today as Buchtičky.

No idea when the yeast buns appeared first, but a fact is that some 500 years ago the Bohemian kingdom was taken over by the Habsburg Monarchy and remained a part of the Austrian-Hungarian Empire until the end of the 1st world war.

Therefore, my wild guess is that the buns must have been in existence for a while because they were popular all over the old Austrian Empire.

Locals from the German and Slavic-speaking countries must have loved it so much that it became an essential celebratory desert dish in each house.

The original Bohemian and Austrian Buchtel includes a jam stuffing, more precisely a harder Prune Jam stuffing which is better known as Powidl in the local dialect German.

Very often you will find that the Buchten is served with a homemade Vanilla Sauce.

I for once would never serve or eat Buchteln without that sauce.

The main reason for that is, that the baked Buchtel dough is a bit on the dryer side of life and the pure creamy Vanilla flavors enrich the dish 10 times more, making it the perfect food combination or you can call it food marriage too.

This time I used some Fresh Yeast to bake this wonderful batch of Buchteln.

We in Austria bake a lots with fresh yeast and in college time it was the only yeast we were allowed to use.

I heard that the fresh yeast is better when used to bake bread, although I think I would always use fresh yeast instead of dried yeast if it was so readily available everywhere.

As per your choice, you can use some thicker jam too to stuff the Buchteln or you can come up with your own stuffing.

Here are some fillings that you can use instead of the hazelnut filling in the recipe: 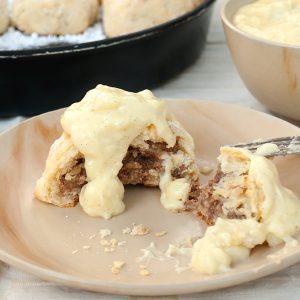 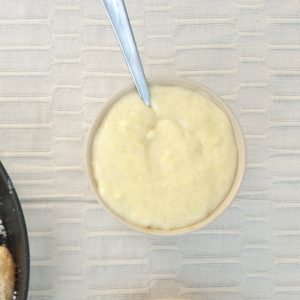