Helene Dsouza
The Big Mac sauce recipe used to be a secret sauce made famous by Mc Donald's signature burger, the Big Mac. Now it's in public domain so that we get to enjoy the homemade big mac sauce version with other burgers as well.
Total Time: 5 minutes
Prep Time: 5 minutes
4.77 from 13 votes
Jump to Recipe 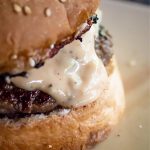 The Big Mac Sauce Recipe is for all those who enjoy the classic big mac burger!

I am one of those who wished I could use the big mac sauce on all burger variations.

Such as in double cheeseburger, Mc Chicken, my Vegan Burgers and even as a french fry dip!

That is why I came up with my own big mac sauce copycat recipe.

Big Mac is my secret obsession. Now it's out!

I enjoy healthy nutritious food but sometimes, once in a while I like a juicy Big Mac burger and I am not going to hide it.

In fact, I believe Mc Donald's wouldn't be what it is without the doubledecker beef patties Big Mac and the amazing burger sauce!

Yet I do love preparing my own burgers as you know because I get to season my burger the way I like it and at the same time preparing burgers from scratch has something therapeutic to it.

The flavoring of the meat, the shaping of the patty, the sizzling of the meat on the grill or in the pan and the ultimate rewarding bite into a homemade juicy burger.

Another perk is that you get to add what you want and like into your burger.

So if I want some beans sprouts or beets, well heck yes, I will add it! If I want Big Mac sauce in my veg burger, I will do that!

So let's get to the Big Mac sauce recipe asap... 🙂

...and let me explain something about the Big Mac sauce

📕 What is the Big Mac Sauce?

The Big Mac Sauce is called the Special Sauce or Secret Sauce by Mc Donald's.

Somewhere I even saw some people calling it the Magic Sauce.

Yep, it's like a famed unicorn story at this point!

The Big Mac Sauce Recipe is very similar to a few sauces out there but comes the closest to the Thousand Island Dressing.

Which is a popular salad dressing made of mayonnaise, tomato ketchup, vinegar and finely chopped pickled cucumbers.

The sauce is creamy and tastes a bit tangy but well seasoned with a hint of tomato and mayo coming through.

McDonald's big mac sauce is only used on one burger, hence the name, the mighty Big Mac.

That's why the sauce is so loved because it's so unique.

It alleviates the flavors of the burger with the two meat patties and the other ingredients.

In fact, the special sauce is McDonald's signature sauce!

Making the Big Mac the core product of the global chain.

Unfortunately, Mc Donald's doesn't sell the sauce, however, they have placed the recipe under public domain (yay!) and numerous copycat versions exist.

Now we can add a dollop of big mac sauce on almost any burger patty!

That is why making your own big mac sauce makes sense and besides, it's so easy to prepare the special sauce from scratch and then too with fresh ingredients!

I have to admit for a few years I just used a thick version of the thousand island dressing in my burgers to mimic the Big Mac Sauce.

BUT, in the past years, I came upon a couple of recipes for the big mac sauce, such as the one found in this book.

I also finally simply looked up the McDonald's website to check what they mention in their Big Mac Sauce ingredients.

According to my findings, trial and error experiences, my homemade big mac sauce is made out of the following ingredients:

For the best Big Mac Sauce result, use only quality ingredients as for example a proper Ketchup, not some knockoff brand.

For the Vinegar use a plain white Vinegar.

I used rice Vinegar as it is more neutral in taste.

The pickled cucumbers are optional, but I don't make my big mac sauce without them because they add a lot of flavor and texture to the sauce.

The pickles should be crunchy, not soggy.

For the onion use a small young onion, shallots or spring onion bulbs (if you want it to be milder).

🔪 How to make Big Mac Sauce?

You will need to simply mix all the ingredients but also chop the fresh ingredients small such as the pickled cucumbers and the onion.

The fresh ingredients should be as finely chopped as possible.

I don't use an onion paste here or onion seasoning.

This is because I want the fine texture of fresh onions and crunchy tiny chopped pieces of pickled cucumbers to give you the extra delight when you bite into your beef burger covered in special sauce.

How to store the homemade Big Mac Sauce?

You can double or triple the big mac sauce recipe to prepare a bigger batch if you want.

Then you can store the burger sauce in the fridge in a simple glass jar or a salad dressing bottle if you like for future use.

That way you will have the sauce on hand whenever you feel like it.

All ingredients by themselves stay great in the fridge, so you can expect your homemade Big Mac sauce to remain good for a week or two of time if kept to cool in the fridge.

If you want to store your big mac sauce for a longer period of time, use onion powder instead of chopped onions in your sauce.

I am not going to limit you in preparing a vegan big mac sauce.

In fact, I think Vegan burgers prepared with soy, vegetable or a vegan version of these rice patties taste all the better with the big mac sauce!

All other ingredients are already Vegan-friendly.

Dear Reader, how are you planning to use your big mac sauce? 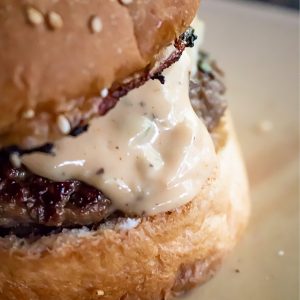