Helene Dsouza
Austrian Potato Goulash, full flavored and so easy to prepare. Make this potato goulash your own by adding sour cream or skip the diary and make it vegan. This is a one-pot & gluten-free meatless goulash recipe.
Total Time: 35 minutes
4.72 from 7 votes
Jump to Recipe

This Potato Goulash is completely vegetarian and a common weeknight dinner meal during the cold winter months in Austria.

The one-pot wonder is easy to make and you just need a few ingredients to prepare the soup within 30 minutes.

What is Potato Goulash?

The Austrian Potato Goulash recipe is a soup dish we all grew up with, in Austria.

In a nutshell, Potato goulash is a one-pot vegetarian or vegan goulash recipe.

In other words, it's a meatless goulash recipe which doesn't include any of the Austrian sausage recipes.

It's based on the regular Austrian/Hungarian goulash and includes the same spices such as Paprika powder and Caraway seeds.

I didn't find a Historical background for the Potato Goulash but you can check the general historical Goulash facts here or even on Wikipedia.

The potato arrived during the Renaissance in Europe.

I bet that's when the Goulash with potato was created.

The plant-based goulash was most probably based on the meat goulash recipe.

The humble potato is one of the most inexpensive ingredients, making this vegetarian goulash soup a budget meal.

One could call it "the poor mans" goulash.

The Non-Vegetarian variation of this goulash is prepared with smoked sausages such as Wiener Sausages, Frankfurters or even little Vienna sausages.

Prepare this potato goulash with other ingredients:

There is a whole goulash world out there!

Goulash dishes come in different variations. Goulash can be a main course dish with gravy, a thick stew or a soup.

You might recall that I had posted my Beef Goulash recipe.

There are a bunch of different Austrian goulash versions.

Certainly, there are many more goulash variations in Austria which are better known in the local regional villages and valleys.

Goulash is a very Hungarian meal.

Due to the fact that Austria and Hungaria used to be one empire, along with other East European countries, the dish got a chance to gain popularity quickly.

In time, the goulash traveled all over central & east Europe and each region has a favorite of their own.

The Goulash "mutated" in each region in its own way.

Local cooks would always use locally available ingredients to serve with common popular side dishes from the region.

The Hungarian goulash is a classic spiced meat stew and this a very generalized term as is the case with other east European goulash meals.

Just as in Austria, Hungarian goulash have local names and variations exist such as the Hungarian sausage goulash.

We in Tyrol (alps) serve the potato goulash with dark Black bread (It's a bread type and it's not burned!) or with small Semmelknödel (round bread dumplings).

A Cabbage Salad with a simple vinegar dressing and caraway seeds is a great idea too with the potato goulash.

I love a bowl of the meatless goulash with a simple green salad. 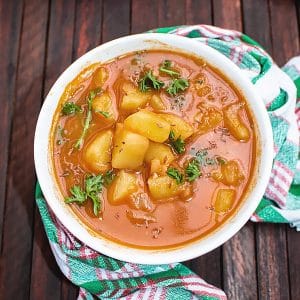