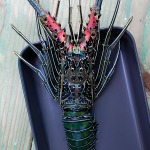 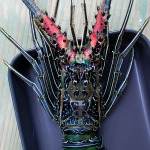 I show you how to cook a warm water lobster with common kitchen equipment.

It's super easy and leaves an impression with your guests.

The guide includes how to cut open a cooked lobster.

🦐 What is warm water lobster?

They are the lobsters that come without claws.

The names are confusing. The fact is, warm water lobsters are not "true" lobsters, hence why the scientific classification is calling them langustas/langoustes.

Not to be confused with langostinos, which are way smaller and an own species.

They live in the warmer oceans and seas in the Atlantic and the pacific. That means they can be found in warmer tropical waters around the globe.

Many variations of this crustacean exist and some are magically blue and multi-colored. These are also called rainbow lobsters in Asia.

The one shown in the pictures and video is a blue rainbow lobster from Goa, the Indian ocean. It's also called a painted spiny lobster.

True lobsters with claws are called cold water lobsters, warm water lobsters, on the other hand, do not have claws and that's why they are actually classified as another species altogether.

They take longer to grow and the meat takes longer to develop, which is said to be more flavorful compared to warm water lobster.

Yet, warm water lobster is delicious and I love that I don't have to deal with claws, which could snip away my thumb or which are hard to crack when cooked.

Warm water lobster, on the other hand, have super long antenna. It's a beautiful animal!

When buying any lobster, you need to get a live lobster.

This is because it disintegrates fast, making it unsafe for consumption if left out too long uncooked.

Large fish markets and grocery malls like Walmart and Carrefour have a whole aquarium section where they sell live lobsters.

The most humane way to prepare your lobster is to place the beautiful animal into your freezer for 15 to 30 minutes. It shouldn't freeze completely.

Here is an overview that will help you with your lobster boil. The complete measurements are located at the bottom of this post. Watch the video too.

Heat up a large pot with sufficient water and salt.

Add vinegar to the boiling water. Acidity brightens the flavors and reduces germs all the more.

Cover and boil for about 5 minutes.

Take lobster out and place it into ice-cold water or cold running water. (Yep they turn red when cooked)

🔪 How to cut open and clean a boiled lobster?

Since warm water lobsters don't have claws, you won't have to deal with this at all. Claws are the hardest to crack in cold water lobster.

The easiest way to handle your boiled lobster is to start with the tail.

Separate the tail from the head. You can just break the two apart.

Cut with your knife lengthwise centered down the inner softer size of your lobster tail to break open the shell. You can use kitchen shears too.

Free the meat from the shell and locate the intestine along the same line on the back with a knife and your fingers.

It will pop out easily, it's got a slight color difference and it's like a string. Discard the intestine

Cut the whole head into two. There will be yellow gooey stuff leaking out first and sometimes this will also reveal the lobster's last meal. That's ok, discard what's not lobster.

Locate the meat and pick it out. Don't take out the meat behind the eyes, you can leave that for the stock making.

The meat in the head is super flavorful and really shouldn't be wasted. It's harder to pick it out, but it's well worth the trouble.

The meat in the legs are the easiest to pull out. The antenna meat works the same way.

Just break the legs at the joints with a skilled crack so that the flesh is still attached and pull it out. It gets easier as you go.

If some meat gets stuck in the legs, I usually leave it there, because the shells are boiled again later for stock.

Collect the shells because you will need those to make lobster stock. Don't throw out the shells, it would be such a waste!

You can place the shells into your freezer and boil them another time when you need lobster stock.

A whole boiled lobster can just be served as is, as a whole. A lobster boil is a good idea at a seafood buffet party.

Here are some meal ideas:

How long to boil lobster?

Your lobster will turn out juicy cooked when boiled for 5 minutes.

Can I parboil my lobster?

I don't recommend it because boiling lobster is first of all quick and also parboiling will turn the meat dry when cooked the second time. There is no use for parboiling. Seafood should be prepared and cooked fresh.

What can I do so that the tail doesn't curl when boiled?

You can fix the tail with a straight stick, or similar. You can tie a butter knife to the tail and that way the tail won't curl.

Why is the lobster not red in the picture?

How to tell if a lobster is bad?

If it smells bad or if the meat is gooey, it's not safe for consumption anymore. That's why it's important to get a live lobster.

When is warm water lobster season?

The season may defer depending on where you live in this world. Some places have special seasons to give the animal time to reproduce again or because it is better caught in a not too warm season of the year. In Florida, for example, they have a lobster season from August to March.

Can I store cooked lobster leftovers in the fridge?

I don't recommend it since it reduces the quality of this expensive crustacean. It wasn't cheap, right? If you must, you can keep boiled lobster in an airtight container for up to 1 day in your fridge.

Needs to be a live lobster because they need to be fresh only when cooked. Lobster degrade really fast. Warm water lobster are also called spine lobster (see post for other names)