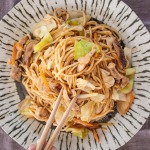 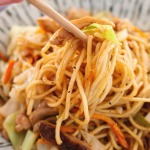 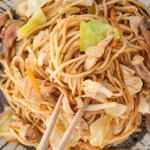 This chicken yakisoba is another classic Japanese stir fry noodle recipe from our Asian food series with Momoko, our Japanese food expert.

We recorded it together back in February in Goa, India.

🍜 What are Yakisoba noodles?

Yakisoba noodles are Japanese egg noodles, which became more widely popular in Japan and the world in the past 60 years.

The noodles have their origins in China and are actually like Chinese egg noodles.

Chinese settlers in Japan would prepare them, but what really made this dish Japanese at some point is the use of a stir fry sauce combination, which they called yakisoba sauce. It was an evolution that took place over time.

This Japanese article writes about the history of Yakisoba. You can use google translate.

The article also mentions a theory, that during post-World War 2, the noodle dish prepared with cabbage, became the poor man's choice.

Cabbage was cheap and still is and it's a vegetable that is filling and tasty.

And so this is why a true yakisoba can never be prepared without cabbage.

🥡 Udon VS Soba VS Ramen VS Yakisoba Noodles

Udon noodle dough, as in the noodle dish Yaki udon, is prepared by stamping on it with your feet. The noodles are flat and it's a long process to prepare these noodles from scratch.

Ramen noodles are stretchy and contain a lye such as baking soda or in Japan kansui (lye water).

Yakisoba noodles are prepared like ramen noodles but they are first pre-boiled/steamed or commercial noodles are even treated with oil so that they don't stick together.

Yakisoba noodles might have the word soba in it but they do not contain any buckwheat flour, which is totally misleading. Soba means noodles in Japanese and Yaki to stir fry.

These are the basic ingredients that you need to make this chicken yakisoba dish. US and metric measurements are further below in the adjustable recipe card.

You can also add bean sprouts as a topping. Bell pepper is never added to a Japanese yakisoba, it's a Western addition, but you can add it to yours if you like.

Here is an overview of how to make this Asian noodle meal from scratch. Detailed steps in the recipe card.

Prep all the other ingredients.

Season with black pepper and pour prepared yakisoba sauce over that.

What noodles can I use if I can't get yakisoba noodles?

Japanese folks use yakisoba noodles but also other noodles can be used. Japanese outside of Japan use also Chinese egg noodles (chow/low mein noodles) or ramen instant noodles (such as Maruchan) do the trick too. It's not a strict rule that you have to use yakisoba noodles, as long as you don't use Italian spaghetti noodles.

Does this yakisoba recipe contain MSG?

MSG is Monosodium Glutamat and we don't add it to this noodle dish. It brings out the umami flavors and MSG is commonly used in the Takeout industry to make food taste more intense and perhaps better.

How to make this dish spicy?

You can add sriracha sauce or doubanjiang bean paste to the yakisoba sauce instead of the ketchup.

What does an authentic Japanese Yakisoba noodle look like?

For the Stir Fry

For the Yaki Soba Sauce