You are Here: Masala Herb » Recipes » Dips and Spreads

Helene Dsouza
The Austrian Liptauer is made of thick Cottage Cheese. In Austria it's known as Topfen, in Germany as Quark.
Total Time: 5 minutes
Prep Time: 5 minutes
4 servings
5 from 6 votes
Jump to Recipe

Liptauer is a well seasoned and spiced cottage cheese spread.

This particular spicy spread is traditionally made with sheep's milk cheese also known as bryndza.

Liptauer originated in the region of Liptov in Slovakia which used to be part of the Austro Hungarian empire before the fall in 1918.

The spread was popular at that time amongst the royal circle and was served with a caviar topping at court and in noble restaurants in Vienna.

Nowadays, the cheese spread is served as a snack in most homes in Austria, Slovenia, and surrounding countries.

In Hungary the Liptauer is served as an appetizer known as körözött.

My family and I had taken a short vacation to east Austria with the aim of discovering and learning more about our culture.

East Austria is known for its White Wine and Viticultural areas in the whole world.

The local inns are run by so-called Weinbauer, known in English as winegrowers.

If you ever get to travel to east Austrian regions such as Styria, try to frequent a Buschenschank Inn (also called Heuriger, just like the drink!).

Buschenschanken serves up local delicacies such as wine, cheese, cold cuts, and also the Liptauer spread.

Homemade bread is rather common as well so the best way to taste the cheese spread is in Styria in a Buschenschanken OR you can recreate the same setting at home.

Serve up the Liptauer cheese spread as part of your cheese and charcuterie board.

I love to serve a white wine but a red wine of your choice will bring out the flavors of your cheese spread too.

Spread some of it into your sandwich bread with other cold cuts.

The Liptauer makes a great snack time savory treat and it's a common school break time snack with black bread for kids in Austria.

Or turn it into a Liptauer cheese dip by serving up salted sticks or a pretzel with it, inspired by the Bavarian Obatzda cheese dip.

You can garnish the cheese spread with caraway seeds or chopped garden cress.

Dear Reader, Have you tried the Liptauer? 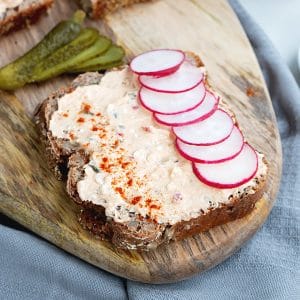