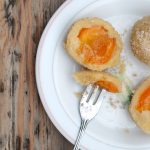 These Austrian dessert dumplings are easy to prepare and are sure to impress your family and friends.

Coated by a tender choux dough sits a fresh apricot from the garden.

Prepared the Austrian way, these apricot dumplings will transport you to a new uncharted food paradise.

I am not exaggerating, that's how most Austrians would feel about their beloved Mehlspeissen such as these dessert apricot dumplings.

Marillenknödel are sweet dessert dumplings prepared with a choux dough.

The stove cooked choux dough is wrapped around a fresh apricot half and sealed to create a round dumpling.

The dumpling is then cooked in water before being cooked with butter and bread crumbs in a pan.

Marille is the Austrian German word for Apricot. In Germany they say Aprikosen.

Knödel is the common German word for dumplings.

Dumplings come in all forms, savory and sweet, in central Europe.

I did mention Mehlspeisen previously on this space.

In a nutshell: Mehlspeisen are meals prepared with flour as ingredient.

These flour based meals have been popular even before the last emperor of Austria had turned it into a fashion.

As a result, and mostly because I am Austrian after all, I felt compelled to share this flour-based recipe.

I prepared another sweet choux based dumpling like this but with strawberries instead of apricots.

You can also use fresh prunes instead of the apricots and create prune dumplings!

In fact, even the dough could be switched and instead of a choux you can use a potato dough or Topfen (Curd Cheese, also known as Quark in Germany) dough.

I prefer the choux dough over the two latter choices.

According to me, it's easier to handle choux dough and it does get a bit "fluffier".

Marillenknödel made with choux dough is more common practice.

🥣 How to serve Marillenknödel

The best way to enjoy these Marillenknödel is with fluffy whipped cream.

Another idea is to serve them up with a Vanille Sauce or a fruit coulis.

Or just leave them plain as they are.

Marillenknödel are great on their own 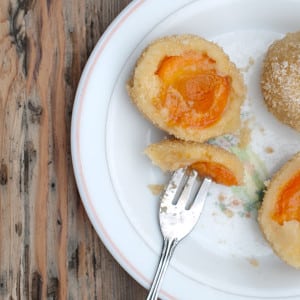 For the filling and coating: