Helene Dsouza
The Norwegian porridge is a wholesome meal in itself. You can choose to add sugar to make it sweet and instead of serving it as a main meal. You can serve it as a dessert or even enjoy it for breakfast.
Total Time: 22 minutes
4.86 from 7 votes
Jump to Recipe

Norwegian Porridge, aka Risengrynsgrøt,  is a one-pot rice meal prepared and enjoyed on Christmas day in the Scandinavian regions in Europe.

It's a super easy recipe.

Yet you can make the Norwegian porridge as a healthy dish for breakfast any time of the year!

Learn how to make the Norwegian Porridge from scratch with the step by step recipe with instructions, ingredients and video further below.

The Norwegians Porridge is a common lunch dish on Christmas day in the scandinavian countries.

They call this milk rice porridge Risengrynsgrøt in Norway and Risengrøt in Denmark.

Apparently this rice porridge is common under another name in Sweden, Finland and Iceland as well.

I can't confirm this as Norwegians mentioned Denmark as another country.

So, while we just call it a Norwegian Porridge, this rice pudding actually belongs to a many people in the Scandinavian region.

I was brought to the attention of this porridge by my brother who's an avid Norway fan.

Having been there for a while he even picked up the language.

So eventually the question came up about this rice pudding in facebook...

What is the Norwegian Porridge?

The Norwegian porridge is prepared with short grain rice such as Paella rice/ Risotto rice.

This particular rice porridge belongs to the Scandinavian region but does come close to other rice puddings around the world such as the French riz au lait, the Indian Kheer or the Spanish Arroz con Leche.

As I mentioned above it's a specialty reserved for the Christmas day.

So, in a way the Norwegian Porridge is a big deal in that sense because it's not some dessert, such as the Portuguese Christmas dessert treat arroz doce, but in fact the main meal.

The original and traditional Risengrynsgrøt is a savory main course dish.

This of course is something unusual and I was really surprised when the Norwegians started to share their childhood food memories when they heard that I was looking for a real Norwegian porridge.

Ultimately, at first it came through that it was a Christmas eve meal.

Yet, I was informed otherwise via instagram from a Norwegian user @kimgiertsen.

Yes, but not for supper, but lunch before church or other activities.

Many people take an almond, remove its skin and put it in the rice porridge.

This is a Christmas game, the person who gets the almond in his or her porridge is supposed to hide it, often in their mouth.

After everyone has finished their porridge someone asks "Who has the almond"?

The lucky person wins a small gift., often a marzipan figurine, in the shape of a pig.

Norwegians mostly associate the Norwegians porridge with Risengrynsgrøt and not Rømmegrøt, which is another pudding but the main difference is that it's prepared without rice and with sour cream.

How to prepare the Norwegian Porridge, Risengrynsgrøt, from scratch?

To prepare the Norwegian Porridge from scratch is not rocket science.

While traditionally it's a Christmas meal, I think it makes a great breakfast dish as well!

From what I was told is that the very traditional Norwegian Porridge does not mention the use of sugar.

However, this changed in time and some people started to add some sugar to their porridge.

So, you can add sugar to your Risengrynsgrøt if you want.

I limit the amount of sugar in mine because I tend to not have a huge sweet tooth, in fact, I would have kept it out completely if it wasn't for the fact that I actually made this batch for my husband who is a huge fan of any rice pudding.

He also likes his sugar!

You could also add some raisins if you wanted to your Norwegian porridge.

To make it, you just need to cook the rice in water and then milk first.

The point is to slow cook it as long as possible.

Most Norwegian will tell you to cook it for about 45 minutes.

In fact, I got the suggestion to first cook the Risengrynsgrøt on the stove until the rice boils in the milk and then to cover and shift the whole content to the oven to further bake it there for a total of 45 minutes or until the whole content is super creamy.

I thought a one-pot dish would be more useful as I try to avoid to wash too many dishes and you know, I like to keep it simple if possible.

So while 45 minutes is the suggested cooking time, I only took about 20 minutes to cook mine because my rice was super soft and the content completely creamy.

I suspect the longer you slow cook the rice pudding on the stove the better the Norwegian porridge turns out!

The end result in general should be that the rice is soft and never al dente.

The Risengrynsgrøt needs to be creamy and thick.

After cooking the rice porridge pour some into a bowl, sprinkle with cinnamon powder and add a spoon full of butter into the center and serve it that way.

The butter is then mixed in, and yes I know I took a huge dollop of butter in the video, but I will tell you, the taste was incredible!

Dear Reader, have you ever tried Norwegian Porridge before and if yes where?

Please, let us know in the comment section further below! 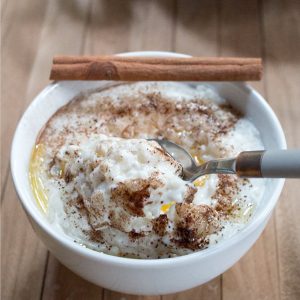 The Norwegian porridge is a wholesome meal in itself. You can choose to add sugar to make it sweet and instead of serving it as a main meal. You can serve it as a dessert or even enjoy it for breakfast.
4.86 from 7 votes
Print Pin Rate
Course: Breakfast
Cuisine: Scandinavian
Keyword: norwegian rice porridge, rice porridge recipe
Prep Time: 2 minutes
Cook Time: 20 minutes
Total Time: 22 minutes
Servings: 4 servings
Calories: 391kcal
Recipe by: Helene Dsouza

To cook the Norwegian porridge: