Those are easy to make and oh so good.

The Gugelhupf is the forefather of the American bundt cake and originated in Austria.

This cake was especially popular during the Biedermeier period in central Europe.

The Gugelhupf has many names and might be better known in some parts of Europe as kuglof, kouglof, Napfkuchen or babovka.

It is a cake which both my heritages call their own and therefore even my mother knows a French Alsatian recipe for it.

My Austrian grandmother would make it frequently too, not the mini Gugelhupf versions but the real large cake.

Since I don’t have the original large mold, I came up with these mini Gugelhupf, which I prefer anyway because of the size.

The original Gugelhupf mold is anyway difficult to get, except if you get to Austria because the German one is different too.

The difference is small, in fact, it’s just the depth of the mold.

Anyhow you should be fine with individual silicon molds as I have used here.

Of course, don’t forget to follow the recipe from beginning to end and you will have baked your own mini Gugelhupf.

The event is being hosted by Kim of Cravings of a Lunatic and Jen of Juanita’s Cocina.

They teamed up with their blogger friends to help raise awareness and support for Cancer and Hospice today in memory of Kim’s dad.

We encourage everyone to read the posts and share their own experiences with cancer.

Hospice was a key element during Kim’s father’s battle with cancer.

They made it possible for Kim to care for him at home.

So please show your support and donate if you can.

You can also contact your local Hospice and donate directly to them if you wish.

A little goes a long way!

S’Mores Brownies in Jars by That Skinny Chick Can Bake

Dark Chocolate and Orange Muffins by The Dutch Baker’s Daughter

My Fathers Day Recipe Round Up by Curry and Comfort

Sauteed Strawberry and Sugarsnap Salad by Cook The Story 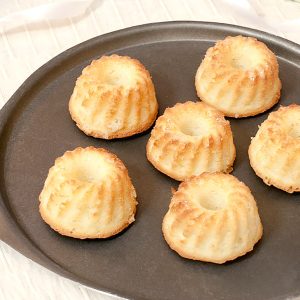