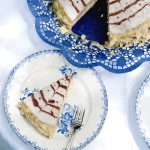 We grew up with french pastries and Desserts at home all the time.

My mother had some knowledge of Austrian cakes and cooking and would present us some of her creations every once in a while.

I had studied Hotel management in college and learned THE Austrian/ Middle European food.

This of course leased my mum a lot.

I would bring home pastries in abundance and show her some of the stuff we had learned.

One of those pastries was the "oh so famous" Esterhazy Torte.

🇦🇹 A little history behind the Esterhazy Torte

He was at the service of the Austrian Hungarian Habsburg Emperor in the 19th Century. The Esterhazy palace is located in Burgenland Austria.

The Original Torte has five layers and is filled with a Butter filling.

The "spider web" cover design is known as Esterhazy pattern.

Nowadays, square cake cuts are common as well and I have often tasted different type of fillings (Rum instead of cognac or more cream then butter).

Even the key layer ingredient of hazelnut is often substituted with almonds or walnuts.

This cake, in my opinion, represents the pinnacle of all pastry creations in this world.

Remember when I had mentioned some months back, that my oven had died while baking a complicated cake?

Well, it was Esterhazy Torte that killed our oven.

I was forced to use the old wood oven to finish this creation!

Ah, that was one trip, I tell you!

I have made this cake a couple of times and I have tested a few recipes.

Some recipes out there from the web and from books are just so wrong!

Seriously, my mother was shocked once, when she saw 1 litter of milk for ½ packet of custard powder.

It would have ended up in a mess, if she hadn't known better

This helps with the filling begin softer and healthier.

I used Rum in it instead of Cognac and the layers were made with Almond flour. 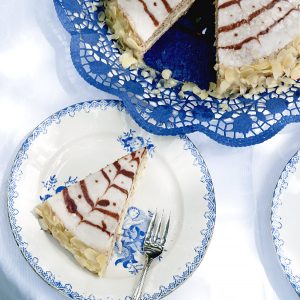 For the base layers:

For the Cream filling: