Helene Dsouza
Pomegranate Juice prepared without a gadget, and only with a Ziploc bag. This method of preparing pomegranate juice doesn't involve a blender because it would mix the bitter taste of the seeds with the juice. I don't like the seed flavor in my juice, some people don't mind it. All methods are described in the post above.
Total Time: 1 hour
Prep Time: 1 hour
2
5 from 3 votes
Jump to Recipe 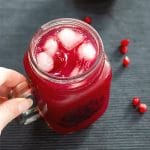 In this post, I show you how to make pomegranate juice wihtou a juicer or blender.

You will be able to prepare fresh pomegranate juice whenever you need it from scratch.

Watch further below the quick how-to video for the BEST fresh pomegranate juice.

📕 What is a Pomegranate Fruit?

The peculiar pomegranate is a fruit that is often while overlooked.

Pomegranates are native to the Mediterranean, Middle East, and the Indian subcontinent.

Pomegranates look like large red apples on the outside.

Apple means pomme in French and this is an indication that this fruit has been around for a while.

Somehow this magnificent ancient fruit is connected to Granada in Spain, hence why we know it as Pomegranate or Grenadine nowadays.

Pomegranates have a thick fibrous shell that grows around a cluster of countless ruby red fruit pulp seeds, between 3 major membranes separated intersections.

You can find pomegranate fruits is in season in Europe, Asia, and North America from November to February.

Pomegranates were around in ancient times in Egypt, Greece, Iran, and all other surrounding countries.

The fruit was so popular that they fabricated legends, such as the greek did with Persephone and Hades's Pomegranate seeds (which somehow resembles the Judaism mythology).

The ruby-red fruit, which resembles gems, never last its charm and we humans still prepare pomegranate juice and even pomegranate molasses.

The following studies have shown and explained further the effects of pomegranate juice.

You have about 3 options to prepare pomegranate juice.

My favorite option is the fastest and most convenient one with the gadget, however for that, you will need to buy a special manual juicer.

To be honest, I don't prepare pomegranate that often to justify the need for a special juicer just for that fruit.

But then I came across a neat little gadget.

with a manual juicer

This is the best, easiest, fastest, and most convenient way to prepare pomegranate juice from scratch.

You will need to buy this manual fruit juicer.

Pro: quick without a mess and the seeds don't get smashed.

The seeds are bitter and when mixed with the juice turn the juice a bit ugly.

Cons: You need to get the gadget, that means one more thing to stuff your kitchen with.

Also, you need to be careful to not accidentally burst the bitter sour seeds.

with a zip lock bag

This method involves simply your time, a zip lock bag, a rolling pin, a strainer, and a bowl.

Basically, the fruit seeds are placed into the zip lock bag and with the rolling pin, you lightly mash the seeds so that the pulp bursts and the juice is collected in the zip lock bag.

The seeds, on the other hand, are separated from the juice.

Then you just need to pour the juice with the seeds through the strainer and collect the juice in a large bowl. Done.

Pro: The tastiest purest pomegranate fruit juice because none of the bitter seeds burst and you don't need a kitchen gadget for that.

Besides, the seeds can be dried and used as a spice, which is known as anardana.

Cons: Time-consuming and a hell of a mess. Pomegranate juice stains just like beets!

This is the most common way to prepare pomegranate juice.

The pomegranate seed pulps are placed into a blender jar and blend smoothly.

Then the juice is strained but tastes bitter because the seeds have been blended as well.

The quality juice brands don't have the bitter after taste but they come with a price tag.

Cons: The ugly bitter taste in the juice.

Here are some ideas on how to use your homemade pomegranate juice. 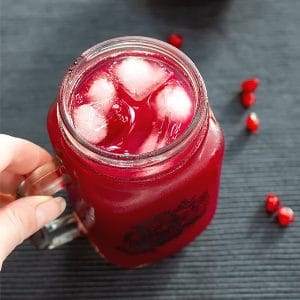 Pomegranate Juice without Juicer or Blender

Pomegranate Juice prepared without a gadget, and only with a Ziploc bag. This method of preparing pomegranate juice doesn't involve a blender because it would mix the bitter taste of the seeds with the juice. I don't like the seed flavor in my juice, some people don't mind it. All methods are described in the post above.
5 from 3 votes
Print Pin Rate
Course: Drinks
Cuisine: Middle Eastern
healthy, how to, juice, pomegranat
Prep Time: 1 hour
Total Time: 1 hour
Servings: 2
Calories: 936kcal
Recipe by: Helene Dsouza