You are Here: Masala Herb » Recipes » Side dishes 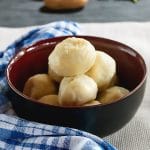 German Potato Dumplings are a wonderful side dish idea. It's mostly served with delicious meals such as Sauerkraut and Sausage, Sauerbraten with Red Cabbage.

Potato Dumplings, aka Kartoffelknödel in German, are easy to prepare.

📕 What are German Potato Dumplings?

The German Potato Dumplings are common round dumplings prepared with potato dough.

The dumplings are served as a savory side dish in all the German-speaking countries such as Germany, Austria, and Switzerland.

Neighboring countries and former countries from the empire, such as the Autonomous Province of Bolzano (North Italy) and Slovenia, count these potato dumplings as their traditional food.

In fact, potato dough is quite a popular dough variety in Central Europe and other dumplings and noodles are prepared with this dough as well.

Potato Dumplings are known as Kartoffelknödel or Kartoffelkloß in most parts of Germany.

In Austrian, we call the Erdäpfelknödel, in Bavaria the potato dumplings are known as Reibeknödel.

The word for dumpling in German is "Knödel/Knoedel or Kloß/Kloss".

In North Germany, they will say Kloß and in the southern regions Knödel.

The Potato is known as Kartoffel in German.

Here is an overview of what you will need to make these from scratch at home. The detailed US and metric measurements are located in the printable recipe card further below.

To prepare the potato dumplings, you will need to follow simple steps.

Place mashed potatoes with flour, salt, pepper, nutmeg, and egg into a bowl.

Combine to a smooth dough.

Keep a pot with salt water to boil.

Boil until they swim on top. Strain and serve up.

We learned to make these dumplings in school (I went to school in Austria) and the teacher shared some tips with us.

If you plan on eating the potato dumplings within 48 hours, prepare the dough and store it in the fridge until you get time to boil and eat them.

I think the dumplings taste better when freshly boiled.

You can boil the potato dumplings and keep them in the fridge, but then they tend to get chewy and hard.

To reheat, place them into the oven and gradually heat up for a few minutes.

To store the German potato dumplings over a longer period of time, freeze them.

Prepare the dough, form the dumplings, cook them and then wrap them in a clean wrap.

To take the frozen dumplings out, defrost them in room temperature water and cook them again so that they get hot.

The savory potato dumplings are usually served with saucy/gravy-rich meat meals, such as Beef Goulash.

Also, fall-themed meals such as a venison dish as served with these potato dumplings. Here are some more ideas.

Can I skip adding the egg to make it eggless or vegan?

No, you can't skip adding the egg to this recipe. The egg helps in keeping your dumplings together.

Why don't you use and add potato starch instead of all-purpose flour and corn starch?

Because you don't get potato starch everywhere, and I personally never have it in my pantry. Why buy an ingredient for just one recipe, right? But you are, of course, free to switch the all-purpose + corn starch with potato starch in this recipe. Potato starch would be a more suitable choice, but it's not the only choice.

Can I fill my dumplings?

Yes, there is a Bavarian variation where they add 2-3 bread croutons as a filling. It adds a crunch to the dumpling center. Flatten a dumpling ball in your hand into a circle and place 2-3 croutons into the center. Wrap the potato dough around the croutons to close the dumplings and boil as directed in the recipe. You can also fill your potato dumplings with chopped bacon or ground beef (or corned beef) or chopped sautéd mushrooms.

Why do dumplings fall apart?

They can fall apart if you didn't measure your ingredients (sorry, but cups won't do it) or if you skipped adding an egg. When shaping them, make sure that they are pressed and rolled into a round ball. The dumplings need to be added to boiling water, never cold water, and the water shouldn't be bubbling too much because that's how the dumplings can fall apart with the movement.

Why are my dumplings rubbery or hard?

Potato dumplings will get rubbery and hard when boiled for too long. Also, overworking your dough can result in hard and chewy dumplings. If you measure and add too much flour, your dumplings can turn harder, too. Choose easy cook-through mealy potatoes, instead of hard potato varieties.

Dear Reader, how and with what are you planning to serve the potato dumplings? 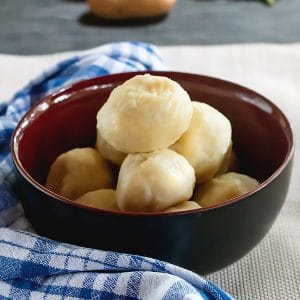