Helene Dsouza
Galette Bretonne Recipe with buckwheat flour dough and stuffed with ham and egg. We call those savory crepes with buckwheat galette bretonne in France and they are from the region of Bretagne (small Britain) in France. Easily prepared from scratch these savory crepes make a great breakfast, brunch or light lunch time meal.
Total Time: 25 minutes
4.67 from 12 votes
Jump to Recipe

Galette Bretonne is a savory buckwheat crepe that is stuffed with ham, a fried egg, and cheese.

You can make your own delicious stuffed buckwheat crepes recipe to enjoy as a savory breakfast crepes, brunch or lunch meal.

French Galette Bretonnes are savory buckwheat crepes that are stuffed with a layer of ham, cheese and a fried egg.

Savory Crepes are a common sight in France - and not just sweet crepes - and they appear in all different variations with tasty regional filling and types of crepes doughs.

These buckwheat galette bretonne recipe will awaken your feeling of completeness.

They are a complete meal, low calorie and so delicious!

I personally enjoy savory crepes in all forms I make them frequently in my home and the savory crepes with ham and egg, aka the Galette Bretonne, is a highlight among all others.

The original Galette Bretonne, also known as Galette complète (a complete Galette in terms of nutrition), is called that way because they are not just made with simple wheat flour.

The Galette Bretonne savory crepes earned that name because Buckwheat flour is added to the liquid dough and the dough is prepared with water instead of milk.

That's what makes the difference to a regular Crepes recipe.

I am an advocate for healthier varieties of grains, so these savory crepes stuffed with ham and egg are a great way to include buckwheat flour in your cooking.

In French, buckwheat is known as Sarrasin and you can usually easily buy the flour in all major supermarkets on a budget in France.

The buckwheat flour crepes, Galette Bretonne, is also known as crepe sarrasin, galette de sarrasin or even simply as crepe bretonne in france.

This french galette recipe is prepared all over France in so-called crepe "bars".

The tastiest that I came across were in Bretonny and in Amiens in Picardy.

Related to the Savory Crepes Recipe:

The post, savory crepes, was first published at masalaherb.com on the 17th November 2015 and has been updated and enhanced ever since. 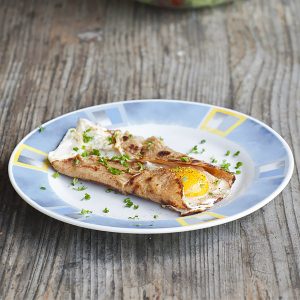 For the Crepes dough: