You are Here: Masala Herb » Recipes » Lunch and Dinner

Helene Dsouza
Croque Monsieur and Croque Madame are fashionable french toasted ham and cheese sandwiches. The difference is just an egg. This preparation underneath is for one, just double the ingredients for two and so on.
Total Time: 10 minutes
Prep Time: 5 minutes
Cook Time: 5 minutes
1 Sandwich
5 from 5 votes
Jump to Recipe 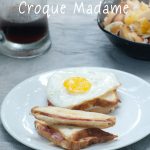 Saturday's used to be house cleaning days in my younger years.

This would be the most annoying day and the best day at the same time in the week.

My mum would make sure that I and my siblings would be up early mornings to attack the day.

Yet, her plans rarely worked out and I must say I was very stubborn and cleaning the house was something I hated, but I was always looking forward to having lunch after what seemed to be the most irritating work ever.

During the warmer summer times, my mum would make Croque Monsieur and Croque Madame.

Both are french style toasted sandwiches, stuffed with fresh ham slices and melting the cheese.

The Croque Monsieur means mister crunch in English and Croque Madame is the crunchy lady.

Fresh white bread slices are usually used but  I have seen places that served it with wholewheat bread slices.

The difference between the Mister and the lady is just a fried or poached egg.

Normally both are decorated with some bechamel sauce on top but my mum would leave that out so to save time.

I pretty much follow the same rules and I even add some dried marjoram or oregano inside.

You see, cleaning days were the most stressful days in the week for my mother and she had to handle us, naughty kids who didn't want to learn cleanliness and discipline, so she would prepare Croque Monsieur mostly in a jiffy because time was precious.

I loved my Croque Monsieur with a green lettuce salad and vinaigrette at the side.

I would devour 3 of those in less than 15 minutes.

My mum had a toaster from the 70s which stopped functioning a few years ago.

That toaster was making the Croque monsieur toast nice crispy on the outside and super soft on the inside.

Delicious Emmental cheese would press through the gaps, making the meal all the more exciting of course.

Today, nothing much has changed and I am still an avid Croque Monsieur and Croque Madame eater.

I have 3 for lunch or dinner with a light salad as a side or one as a snack in between.

Usually, I don't make them for breakfast but you could do that too.

My husband likes them as well but he is not that crazy about them except if I get a chance to purchase Emmental in Goa.

The right choice of cheese makes it all the more interesting.

Simple but oh so powerful!

I am not the only one who feels the same way.

We have Croque Monsieur and Croque Madame in the pastry shop/cafe.

Especially french folks of course love and value their Croque Monsieur form their childhoods, so it is not surprising when you see somebody walking around in the neighborhood with a Croque Monsieur between his/her fingers.

Especially french folks of course love and value their Croque Monsieur from their childhoods, so it is not surprising when you see somebody walking around in the neighborhood with a Croque Monsieur between his/her fingers.

Back in France, I remember seeing other Croque variations.

I recall a place in Auvergne (central France) selling a Croque Mademoiselle (Crunchy Miss) and I did see a few places who ignored the Bechamel sauce topping rule.

Another one near a lake somewhere in the Bretagne (West french coast) had a sausage instead of an egg on their Croque Madame.

I don't think so anybody takes the names too seriously since it's rather a newer food invention from the 60s.

The Concept is to have a quick bite with minimal ingredients which satisfies the typical European taste preferences.

Have fun and take a bit of a Croque Monsieur and Croque Madame!

Would you prefer a Croque Monsieur or Croque Madame for breakfast, lunch/dinner or as a snack? 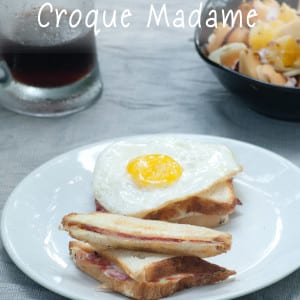 Croque Monsieur and Croque Madame are fashionable french toasted ham and cheese sandwiches. The difference is just an egg. This preparation underneath is for one, just double the ingredients for two and so on.
5 from 5 votes
Print Rate
Course: Sandwich
Cuisine: French
Prep Time: 5 minutes
Cook Time: 5 minutes
Total Time: 10 minutes
Servings: 1 Sandwich
Recipe by: Helene Dsouza

For the Croque Monsieur

For the Croque Madame