The other day my husband bought some excellent veal belly which he found in a corner at market.

Usually, these kinds of meats are uncommon or asking for their prices.

I have to confess I wouldn't know where to buy veal or other meats such as lamb, buffalo or even deer.

The later meat will not be available.

Game meats such as deer boar, tortoise and frog are banned and protected under the wildlife act in Goa.

Well, we are good people, follow the rules and have a common sense that those animals would be extinct if nobody would throw in some harsh rules!

The first dish ever occurred to my mind when thinking of veal is... surprise surprise... the blanquette de veau (translated meaning "white veal").

I've loved this dish since ever, even at the time when I had stopped eating other meats because of my distaste towards animal fats.

Yes, the blanquette is one of the most traditional, fashionable, easiest and flavorful dishes out there which anyone should miss.

It appears complex to the one who hasn't cooked it before.

When you think about it, it is really simple to reconstruct the recipe for anybody

Even for those who haven't cooked much in their life.

Remember  I had mentioned countless times before, how annoyed I was that I had to cook, it was work, purgatory and no fun to me in my past.

I blame the school kitchens which have that "grey metal" look.

At the point in time when I was a huge zero in cooking, I had learned to recreate this dish without much trouble.

A perfect blanquette de veau, in fact, I don't even think you have to actually learn anything.

It is just simplicity...you cut the meat, you throw it into a pot together with carrots, etc, cover it with water and let it cook for a while on its own.

The stock that is made, it is used to make a sauce, which requires a few more ingredients.

You need to impress your friends, family members or co worker?

Here we go with a classical french dish which won't abandon you at a time when you expect it all to work well together.

You are too busy to cook up a fabulous meal?

I give you my blanquette de veau recipe as a solution, as mentioned above, its one of the easiest dishes in this world.

Well, enjoy it and let me know how you liked it!

There are countless amazing blanquette recipes out there. Do you have a recipe which you would like to share with us? A different version, a fusioned creation, a globalized blanquette? 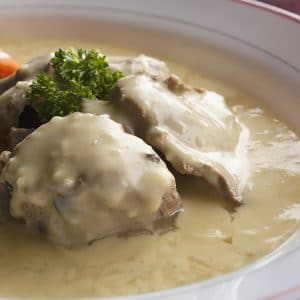 For the Meat and Bouillon

The Tomato helps to clear the bouillon, so dont forget to add it before cooking the meat.
Made this? Get featured!Mention @real.masalaherb or tag #masalaherb!
« Rare Indian Berries
Cold Tomato Orange Soup with Buffalo Mozzarella »