In India, one fruit has gained more more importance over the years.

I am speaking of the Indian Gooseberry, which is commonly known as Amla all over the country.

The Amla Berry is popular amongst Indians for ages, but not for its culinary uses but mostly for its medicinal Ayurvedic properties.

The benefits are countless, yet the fruit never achieved a popular statues outside the Indian subcontinent.

Keeping all that in mind, I had already started to research a year ago for the reason why the fruit was barely used in the kitchen even amongst the locals.

My conclusion is that the fruit is not the easiest to handle and its super sour.

Nevertheless, I came up with a solution and reason to use it all the more in our home, simply by turning it into a delicious candy treat for the whole family!

In Goa, the fruit is hardly used. Apparently the fruit used to be not available here before, but as you know Goa has grown immensely over the year, so it isn't a surprise that the fruit finally ended up in the local markets, such as the busy Mapusa Market.

I guess the Indian Gooseberry is a typical northern fruit (correct me if I am wrong), yet when I roamed about the north and I visited markets, I hadn't come across it.

India is a complicated and mysterious country, so if I had moved in traditional villages, then maybe I would have got a glance of an Amla tree.

For sure at least the fruit isn't as rare as other Indian Berries, such as the Goan Zunna and Kantam Berry.

The Indian Gooseberry is known in some languages in a different name, but Amla is a name that will pass in most of the places.

In Thailand its known as Ma Kham Pom, in China as Anmole, in Tibet as Skyu ru ra, in Myanmar as Zee Phyu Thee and the botanical latin name would be Phyllanthus emblica or Emblica officinalis.

Often it happened that I am looking for a fruit in a market and the seller can't recognize it, sometimes he will know it under a different name, so this knowledge here might come handy in the future.

Unfortunately wiki isn't always correct, so please feel free to let me know if you think one name here might be wrong.

For example the Konkani translation in Wikipedia is thought to be wrong by the locals here.

Why is the Amla Berry so valued nowadays? What's the fuss about it?

As I had mentioned above, the fruit is much used in the Ayurvedic Medicine.

If you come across the famous Himalaya branded Avurvedic Tablets and Capsules, you will realize that many of the mixed ingredient products include Amalaki (Sanskrit word).

I even heard that the Amla powders are a key ingredient in some famous Ayurveda mixtures such as Chyawanprash.

Unfortunately my knowledge is very tiny around that, otherwise I would share some ingredient mixtures that will boost your health.

Instead of writing about some healing Amla mixtures here, I decided to go with what I am good in, cooking.

Anyway, there are more cooks in this world then Medicine makers, so at the end my knowledge will make more sense for you all.

The Indian Gooseberry appears to be another super fruit just like the soursop (fruit).

It's stuffed with Vitamin C (Antioxidants), in fact some would even say that it contains the most concentrated amount of Vitamin C found in the Plant kingdom.

Otherwise the Indian Gooseberry is known to help against indigestion, inflammations, arthritis and even diabetes.

It cools the stomach when taken in, it treats dry cough and it even gets rid of the toxins in the liver.

Believe me, the fruit has so many uses for our health, it's incredible that the western countries haven't realized and used it yet!

The plant parts and of course fruit have been used since ever in the Ayurvedic Medicine, yet it seems the Common Medicinal world has just started to test it in laboratories all over the world.

I have been using the Ayurvedic Amla powder for 2 years now and I can guarantee that it has changed my health to the better!

For that reason I had decided that we should use the fruit in our kitchen as well.

After asking some of the Karnataka people here in Goa and after researching online, I came to the conclusion that the fruit is used in the kitchen but that it was rather rare.

The reason for that is, that the Amla fruit is very sour, astringent, bitter, a bit sweet and even pungent (incredible right?!).

Plus it is super hard and never gets soft, even  when its fouling, and that core isn't making it any easier to cut it either.

Mostly, locals would throw it into a curry just like the Ambade fruit or they would simply boil it in some water, add some salt on it, leave it in the sun and eat it like that.

I heard as well that some people make a pickle of it or that some just grate it into their food like Lemon Zest.

I wasn't in the mood for a curry or pickle I wanted to turn the fruit into something sweet, so I researched my part online and I came across a page that was describing on how to make Amla Candy in Hindi.

Cutting and preparing an Amla fruit is a real challenge at the beginning and you will need some time and patience to finish the job.

Seriously, the first time when I went for it, I thought I would cry out of frustration, but then I got smarter and figured out that there is a little trick.

The best way to get rid of the hard core is to boil the fruits first in water and then the seeds comes out easily.

At the same time the boiling helps in getting rid of any bitter flavors in the fruit.

I went for the candy recipe as you can see, but I changed it a bit by adding some Strawberry powder.

Now don't judge me, but I used Strawberry Tang!

It was waiting there in my pantry for me and I thought the amla candy recipe was a bit boring after having tried it last year.

It needed a kick and some color effect!

The Tang didn't change flavor after cooking it!

I tried different cooking ways, stove top and micro and with and without keeping it in the sun and I decided now that the recipe was perfect and complete.

Apparently I read somewhere that the amount of tannin in the fruits helps it to absorb (?) colors better, so another reason why the fruit likes to be bright in candy form.

Now its about time that you get to try it and enjoy the Amla candies as well!

By the way, the fruit in its sugary candy form can be kept for a good while, of course you should store it in a cool place! 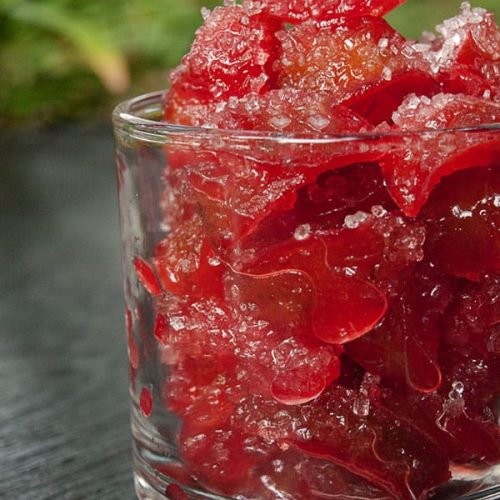 Amla Candy – How to use Amla – Amla benefits – The Indian Gooseberry

Note that the making of the candy takes a couple of days and plenty of sunshine!
Made this? Get featured!Mention @real.masalaherb or tag #masalaherb!