You are Here: Masala Herb » Exotic Ingredients » How to roast Cashews - How to prepare Cashew Fruit

Helene Dsouza
A guide on how to prepare and cut a cashew fruit, aka caju.
Total Time: 5 minutes
4.29 from 7 votes
Jump to Recipe

I am sharing how to roast cashews and how to prepare the Cashew Fruit.

This post is meant to educate how to roast small quantities of raw cashews in the outdoors and you will understand why further below.

Cashews have turned, in the last few years, into a prime snack time choice for health-conscious people in the western world.

Cashew nuts have always been regarded as a small luxury and people use them in sweets and curries.

While cashew "nuts" have been very expensive and were rather rare some 10+ years ago, this somehow changed and we ended up with more choices of acquiring a few grams of precious cashews in our local super stores.

Former Portuguese colonies would call the cashew fruit (yes there is a cashew fruit!) and cashews their day to day staple, the rest of the world remained oblivious to its existence for a long time, due to the high rates in the supermarkets.

This started to change in the past 10 years when demand couldn't be fulfilled and the world decided to commercialize cashews en masse so that the western world could have a "bite", while reducing the buying rate of the luxury nut extremely.

This may sound good to you, but there is a problem with that.

You see, the cashew nut" has a special shell which has toxic properties in the roasting process and you need to roast to get the hard outer shell of the main seed/nut inside.

So while roasting small quantities is not a problem at all, this changes when people work, badly equipped and without gloves, to roast massive amounts of cashews while being paid almost nothing.

You can read the report about the cashew nut problem in the Guardian and the Telegraph.

Yes there is a dark side to the cashew nut production and yes it should be addressed to alleviate the peoples living conditions in India.

After all, a lot of people are depending on the export of cashews and they make a living with it.

Cashews are healthy too, so we shouldn't just forget about these special nutritious natural snack time treats completely.

Local people in Goa (former Portuguese colony in India) still roast small quantities of cashew nuts in the outdoors in the evenings.

The traditionally roasted cashews have a very intense flavor, which can't be compared to the store bought cashews which are available in Europe.

Most of the former Portuguese tropical colonies roast cashews when they are in season which is now, from March to June.

This includes Brazil in South America, Mozambique in Africa and South East Asian States such as Vietnam, Indonesia and Philippine.

There is more to the Cashew, in fact, did you know that there is a bright orange/yellow fruit?

Well, I was quite intrigued when I saw it in real time, but more about that further below.

Cashews actually originated in South America and only thanks to the much traveling Portuguese conquerors was it introduced to the tropical Indian coastline state Goa.

You might recall how I had explained in my Spice Garden post how Vasco da Gamma and his lot had ended up here in Goa, India.

The cashew tree thrives in a tropical climate, therefore, the cultivation is still limited to countries near the equator.

On top of that, it takes a while to grow these fruits, in fact, they grow only once a year, so that the nuts (which are, in the botanic society, considered seeds) can be harvested, dried and roasted for the commercial sale.

So, how to roast cashews?

It makes sense to collect the nuts and to roast them yourself at home (if you have a garden or veranda or something similar and of course if the raw un-shelled nuts are available in your surrounding).

I had gone to the Mapusa market to buy a kg of raw Cashew nuts (about 100 INR = ~1,50 €). On top of that, I got a few proper whole Cashew fruits from my neighbor's tree with the seed/nut still firmly stuck on the fruit, so that you get an idea what the fruit looks like.

As you can see in the picture the orange/yellow Cashew fruit is on top and the nut in the shell in hanging downwards.

How to roast cashews outdoors?

So, now let's get to the point to where we will prepare our green cashew seed pods for the process of extracting crunchy and freshly roasted nuts.

First of all, you need to keep the green seeds to dry in the sun for a few days.

We kept ours about 5 days in the hot Indian summer sun before my husband decided that they were about right to be roasted.

The seeds are ready to be roasted when they lose their green color and have turned brown/grey by the sun rays.

Learn how to roast cashews below in the instructions.

How to prepare a Cashew Fruit?

The Cashew fruit, also known as caju in Goa, has a purpose as well. You can eat it! The surprising part of the fruit is that it is tasting rather super delicious.

I would describe the aroma and flavor as a mixture between Mango, Green Chili, and Jackfruit and with a hint of acidic notes.

I am not sure why the fruit has never been commercialized in the world, compared to the mango. The reason might be because the fruit pulp tends to turn mushy really fast and is therefore not suitable for transportation.

If you would see this fruit in your local grocery market, would you actually know how to cut and prepare a cashew fruit?

Yes, the fruit is tricky and when looking at the cashew fruit, it gives you the impression that the fruit is a plastic replica, yet in fact it's a very fleshy and juicy fruit full of flavors.

Below I explain how to prepare a cashew fruit. 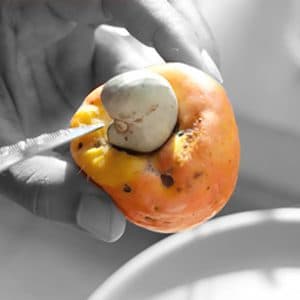 How to prepare cashew fruits

The Cashew fruit can be turned into condiments and other delicacies. It has high acidic amounts and therefore cashew fruits are used to prepare vinegar.

In Goa, there is popular traditional alcohol made of the Cashew fruit called Caju Fenni.

The fruit is mashed, fermented and double distilled before the fruity alcohol is sold in the local markets. You can see what the traditional distillation looks like here. It's basically a Schnapps variation.

Dear reader, have you ever eaten a cashew fruit? 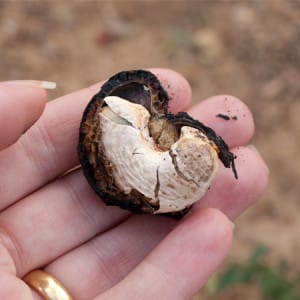 How to roast Cashews

A short guide on how to roast raw Cashews in the shell outdoors.
4.34 from 6 votes
Print Pin Rate
Recipe by: Helene Dsouza