Helene Dsouza
The Hog plums are first marinated to extract the flavors before the curry is cooked. The Hog plum curry is made with coconut and is a 15-minute vegan curry which you can also enjoy all year round. Serve with rice, chapati or just bread.
Total Time: 50 minutes
Prep Time: 20 minutes
Cook Time: 30 minutes
4 servings
5 from 1 vote
Jump to Recipe

Hog Plum Curry is a typical dish during the Hindu Ganesh Chaturthi festival in Goa and Maharastra, yet this deliciously sweet spicy and tangy hog plum curry is commonly enjoyed whenever the hog plum is in season.

Years ago I learned about this curry with hog plums from our neighbors.

They are Hindus and they would prepare and share with us a bowl of this delicious tangy sweet but spicy curry during their Ganesh Chaturthi festivities, which is a popular Hindu festival on the Western coast of India.

They called this humble looking green, but hard, fruit "Ambade, Ambadi or Amade (अब्दे )" in Konkani, the local language in Goa.

However, finding ay translation in Konkani the internet is a challenge at times, so only after researching for a while, I was able to learn that this super sour fruit was called a hog plum in English.

The Hog Plum is in season in Goa during the monsoon, that means from July to September and during that time you can see local ladies selling them in the municipal markets, such as Mapusa market.

The Hog Plum has many names in India, so don't try to ask for the hog plum per se, because nobody will understand what you want in the markets.

Other names in other languages for the Hog Plum include:

There are a couple of different varieties of hog plums.

The Hog Plum can be commonly found in India in the south, as it needs a humid and tropical climate.

The fruit itself looks very plain, kind of like a tiny green mango, 2 inches big in average.

The skin is not more then a Millimeter thick and the flesh maximum up to 0.5 Centimeters the rest is a seed core.

Apparently, other hog plum varieties have lots more flesh to the core, so if you think you have found a hog plum, it might just be a different variety.

It is said that the Hog Plum originated in South America and came later on to the African continent and further even to the tropical South Asian lands.

In my research I discovered that in South America it is commonly used to make syrups, jellies and even vinegar.

Yet in Africa it seems to be less popular, but in India it is a common addition to Curries.

In fact Hindu families tend to eat much healthier and have a strict plant based diet.

Therefore, curries with unusual, lesser known ingredients, such as the hog plum, are more common.

In fact there are a bunch of ingredients, which look like weeds growing in my garden, that are used in their food preparation.

Often while these ingredients do not have an English name.

Luckily, I was able to learn more about the hog plum, as it's not completely uncommon as an ingredient in this world.

The Hog Plum seems to be rich in Vitamin C and B1.

I had a feeling that it is a good source of Antioxidants, since it is a very sour fruit.

Normally you suckle the flesh of the core and you twist your face expression like a monkey, except if you add it into the curry.

That is exactly why we keep the peeled hog plums to marinate with jaggery sugar (Palm Sugar) and salt, as it pulls out some of the extreme tangy sourness.

Also, the sweetness of the Jaggery sugar and the heat of the chilis, balances the extreme sourness.

The Hog Plum can be eaten as well, although there is not much to bite on.

You just need to suckle on the flesh that surrounds the seed core as it will have taken in some of the lovely sweetness of local jaggery.

The Hog Plum curry below is prepared without onion and is a one-pot dish.

It's important to keep the fruits to marinate first and then to prepare a smooth coconut based paste.

The Curry itself is completely Gluten-free and Vegan.

Dear Reader, have you ever tried the hog plum before? 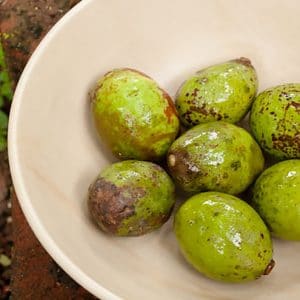 For the Curry Paste: