Helene Dsouza
Creamy German Cucumber Dill Salad aka Gurkensalat. You can choose to slice your cucumbers fine (the way they do it in Germany) or to cut thicker slices to add crunch (the way I do it).
Prep Time: 7 minutes
2 servings
5 from 5 votes
Jump to Recipe 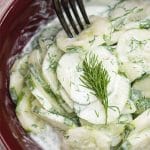 Refreshing German Cucumber Dill Salad to serve as a salad side dish during the hotter months of the year.

This salad with cucumber is better known as Gurkensalat in German.

Gurkensalat is a super popular spring and summer salad in Germany, Austria and all the surrounding countries.

The word Gurkensalat itself means cucumber salad (Gurke is a cucumber).

This particular cucumber salad is served during the spring and summer months.

People love to serve this cucumber and dill summer salad as a side when they sit outside for food or at a BBQ.

Traditionally, the cucumber salad with the dill salad dressing is served with cooked sweet water fish.

Otherwise, feel free to serve up this delicious creamy cucumber salad with a vegetarian or vegan meal.

There are some of the more common variations of the German cucumber dill salad.

You have the option here to make it the way YOU like it.

You can prepare this German Gurkensalat the way you like it.

I tend to prepare a cucumber salad with sour cream and dill.

I think Austrian cucumber salad is usually prepared with liquid whipping cream while the German ones are made with sour cream.

There will be regional varieties of Gurkensalat in the German speaking countries and neighboring countries such as poland and slovenia.

I use whatever cucumber I can get from my local grocery store. Seedless varieties are prefered.

I semi peel my washed cucumbers for the green peel border effect ( I eat with my eyes too).

Then I simply cut my cucumbers into thick slices because I like the crunch.

Germans use a manual vegetable slicer to cut the cucumbers thin. So, the traditional way is to cut your cucumbers into thin slices.

For the I simply chop the fresh dill herb and mix it into the sour cream and seasoning.

The cucumber salad dressing is poured over the cucumbers and I usually do that in advance and not just before serving because I want the cucumbers to take in the dressing flavors.

Leave the cucumber to sit for a while, that way excess waters will come out, which you can discard before adding the dressing

Another idea is to let the sliced cucumbers sit with some sea salt.

The sea salt will help in getting excess liquids out of the cucumbers.

Then you are left with not adding salt to the dressing.

Keep in mind that the cucumbers will lose water, so if you don't want liquids but a creamy thicker dressing, simply add the dressing before you serve up the salad.

Dear Reader, with what do you serve this Cucumber dill salad recipe? 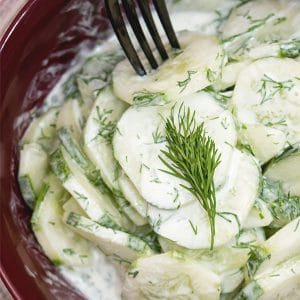 Creamy German Cucumber Dill Salad aka Gurkensalat. You can choose to slice your cucumbers fine (the way they do it in Germany) or to cut thicker slices to add crunch (the way I do it).
5 from 5 votes
Print Pin Rate
Course: Salad
Cuisine: Austrian, German
German Cucumber Dill Salad recipe, How to make cucumber dill salad
Prep Time: 7 minutes
Servings: 2 servings
Calories: 51kcal
Recipe by: Helene Dsouza