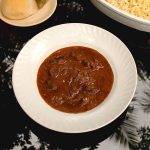 In Europe we have something like a spiced meat stew that has gained popularity with time all over the world.

As the title suggests, I am speaking of the brown paprika loaded Goulash.

Actually the dish is typically Hungarian.

Once upon a time Hungary and Austria used to be one without borders.

It is fair to say that Goulash has become an Austrian favorite and so mush so that this its "national dish".

Yet, we shouldn't forget that it was first the common folk of Hungary, the shepherds and farmers, who had come up with the dish.

However at that time, the so called gulyás in Hungary, looked pretty much different

In fact the main ingredient that defines goulash today wasn't included int he dish then.

You can say it was quite plain and it was just plain meat and onions cooked over an open fire.

The Paprika powder was imported to Europe and was so used for the first time in the Goulash only after the discovery.

It was discovered in Terra Nova, this is better known as the Americas.

Gulasch (the Austrian name and spelling) was used by the Austrian nobility to support the idea of a united Austrian-Hungarian Empire.

Yet they were not the ones who indulged it at the time.

📕 What meat should you use in a Goulash?

For a very long period it was the people's food and in my opinion the reason for that was, that mostly poor cuts of meat were used to make this stew.

The original and traditional Goulash has always been prepared with Beef or even veal.

Younger meat wasn't always favored, since this stew was and is meant to be cooked over a period of time to gain flavor and aroma.

It makes more sense in this case to use tougher meats, it just makes the goulash much tastier.

Over time, as one can imagine, the goulash was prepared with pork, horse and even mutton meat and back then.

The dish finally even reached the German lands and before you knew it, it was popular in Germany too.

It was already everybody's favorite in Slavic countries such as Croatia, Slovenia and so on.

So as you can see, Goulash has lots of History at the core of Europe.

Unsurprisingly the world has embraced it with open hands in their homes.

While the recipe traveled over borders and cultures, it began to mutate and a so called goulash evolution had occurred.

This Beef Goulash recipe below is just the start of a series of different European versions.

I do intend to introduce you over time many more Austrian specialties and versions of Goulash.

There are so many varieties and styles, and those certainly deserve their own articles devoted to their style, ingredients and cooking technique.

Of course I haven't forgotten the Vegetarian readers among us, so brace yourself for a traditional Veg version as well

However for now, let's focus on the basic beef goulash.

Some people would call it the "old Vienna goulash" and others will tell you that this isn't a basic goulash.

Though according to chefs in Europe and my hotel management book this is the main goulash recipe.

This is the type of goulash you will have in Restaurants across Austria.

You have to know, that in central Europe, everybody is very exact about names and little ingredient changes.

What defines the Beef Goulash (better known as Rindsgulasch) is the use of Caraways seeds in combination with Paprika powder and Garlic.

The meat, chopped onion & Garlic and paprika powder are glazed with Vinegar.

Glazing helps the Paprika to remain a vibrant red.

White flour is used to bind the sauce.

The meat is cut into 4cmx4cm thick cubes, as compared to a pork gulasch that calls for 3cmx3cm thick meat cubes.

My recipe includes all those steps, yet I have added some Tomato puree for the taste and as a color.

Otherwise it's pretty much what you would get if you were to order it in a Austrian inn.

Oh by the way, I had served the gulasch with Spätzle noodles, which in my opinion fits well togethe

However feel free to serve it with other sides, such as rice, Knödels, Potatoes or even Polenta.

Some folks out there eat it more like a soup, by dipping in bread, so that's an other way of indulging in this dish. 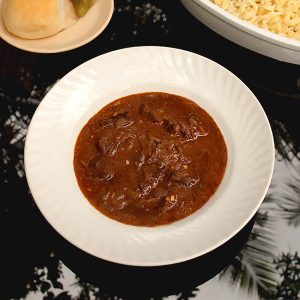