When visiting Goa, India, you will certainly end up touring the state and taxi drivers will take you to a spice garden Goa.

The visit to a spice garden is for all those who enjoy learning something new and for those who like to learn about the food, culture, and history of a place. 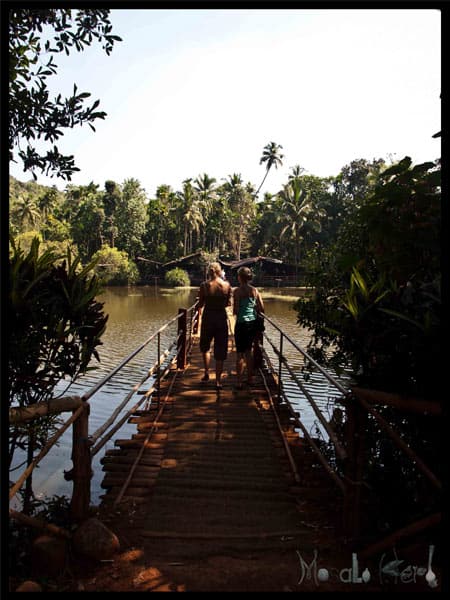 A while back I had the chance to visit the spice garden Goa in the sunny Indian coastline state. Goa has a rich history, with Vasco Da Gama, the famous discoverer of the Renaissance has been to Goa in his lifetime and with the establishment of the spice route through the former Portuguese colony, Goa. 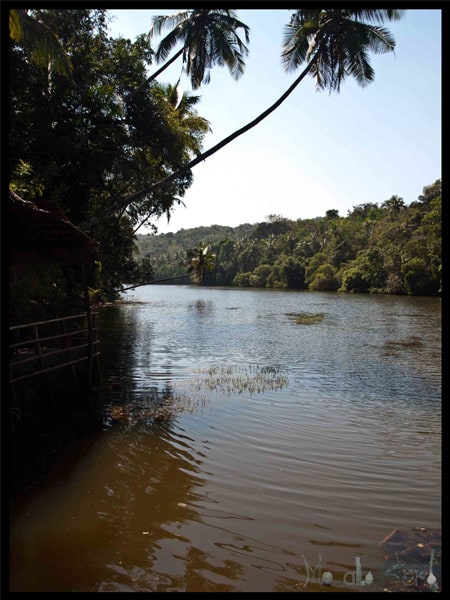 I remember in my second year of secondary school a history lesson about the early sea travels and trades. You surely know some famous discoverer such as Christoph Columbus, Ferdinand Magellan, Amerigo Vespucci and Vasco da Gama.

The later had traveled on behest of the Portuguese king to Calicut in 1498 and later on to Cochin and Goa, which they called Golden Goa. I was so mesmerized as a kid by the discoveries of our fore fathers. These must have been exciting times. 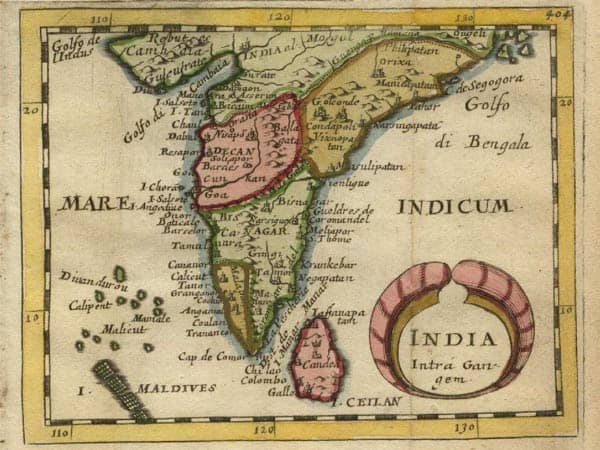 Anyways, the Portuguese's aim at the time was to establish a spice trading route, to gain the overhand of this wanton market in Europe. Those were great important times in Europe, with great kings governing their lands, this was the time of Renaissance - The rebirth.

You have the choice to visit several different spice plantations in Central Goa - Ponda. We had visited one of the major Spice Plantations. Certain particular plantations are surrounded by lakes & rivers and are situated in the jungle.

The entry for visitors is somewhere around 500 INR (~7€) with food buffet included and they even provide a separate option where visitors can bath an elephant. To reach the spice garden Goa you just need to grab a taxi and the taxi driver ll be happy to take you there. 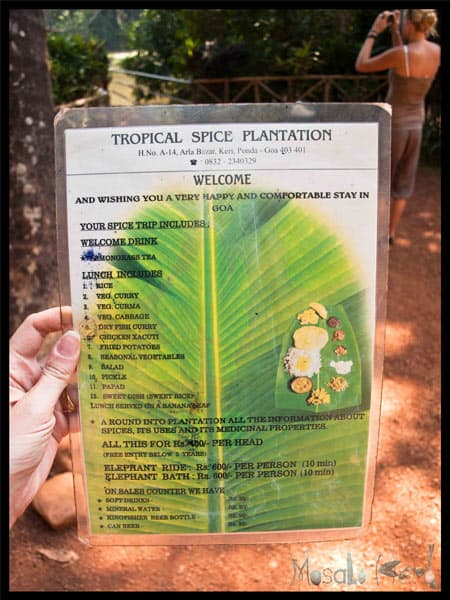 Every visitor receives a homemade aromatic lemongrass ginger tea as welcoming drink before the tour starts. The Guides are quite friendly and they can answer basic questions about spices. It depends on the guide and his/her experience in the spice field.

What some might find helpful in the spice garden Goa, is that there are special tours for certain languages. You can get Hindi, English and Russian language tours. Some might even provide different language tours, which I didn't mention here, 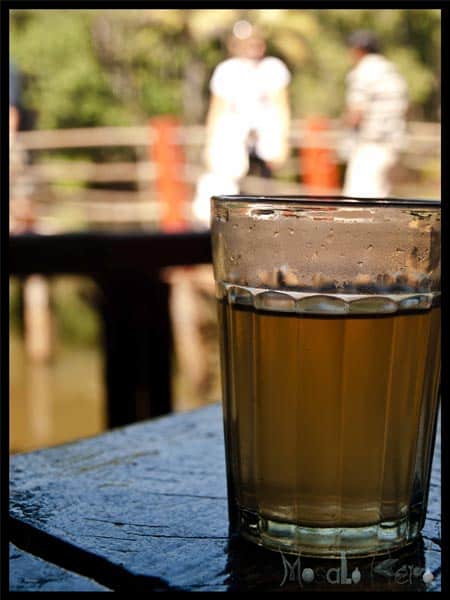 Once you are ready to go, you just need to join a group with a guide to start the spice garden tour.

The guide explains and teaches you how to make an Indian Aphrodisiac with spices.

Have you heard of Piri Piri? 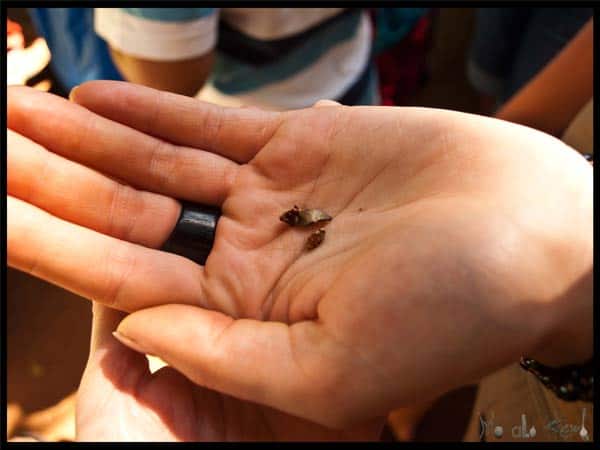 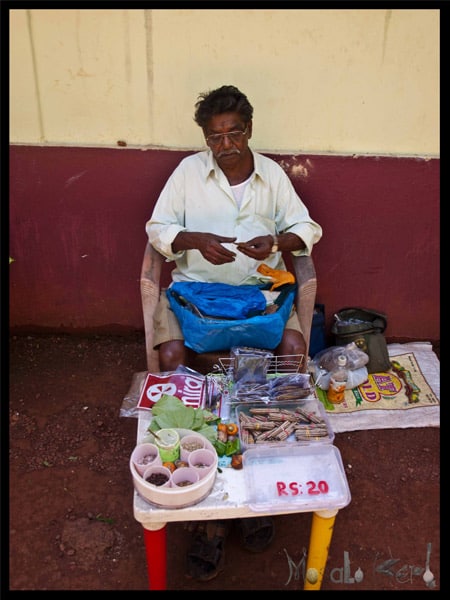 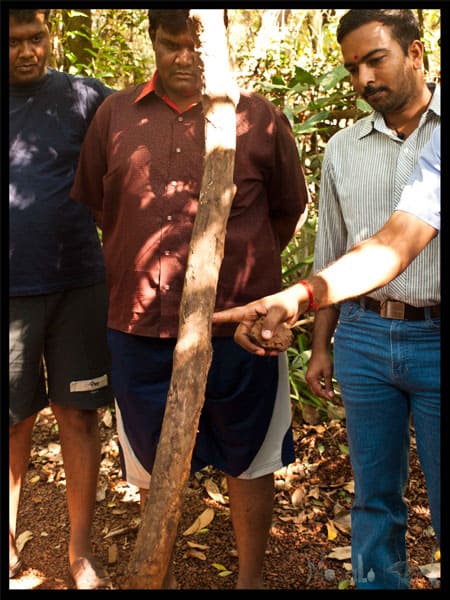 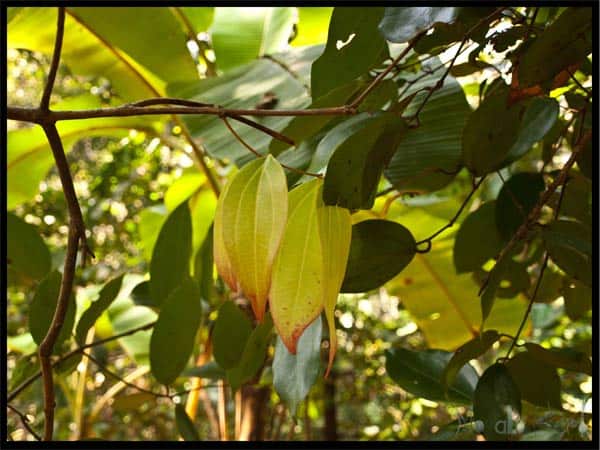 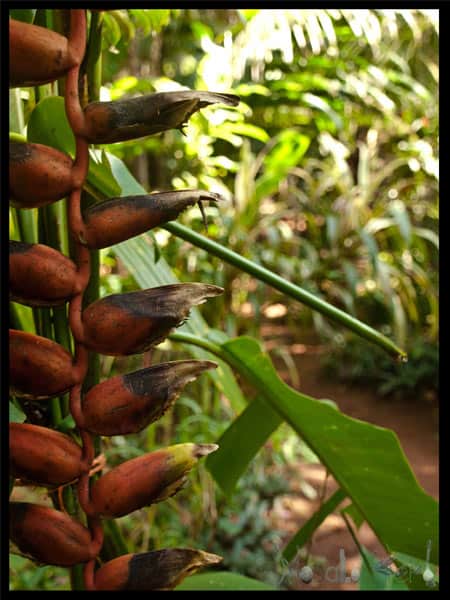 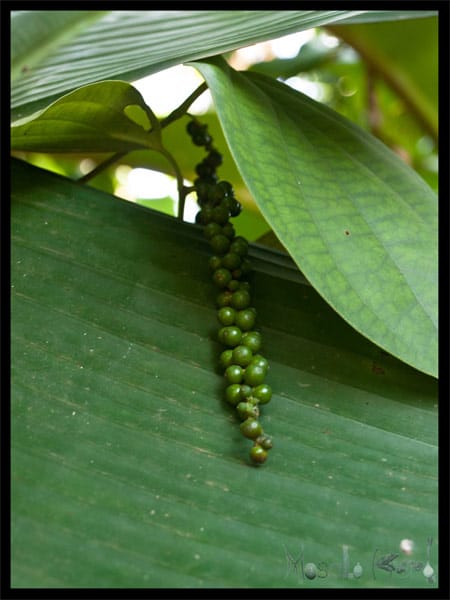 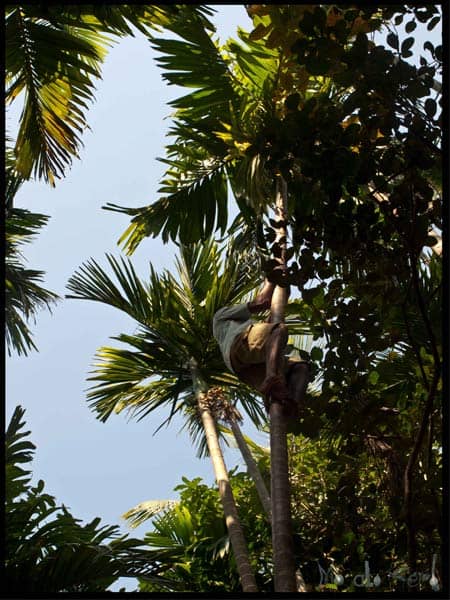 Climbing up a betel tree 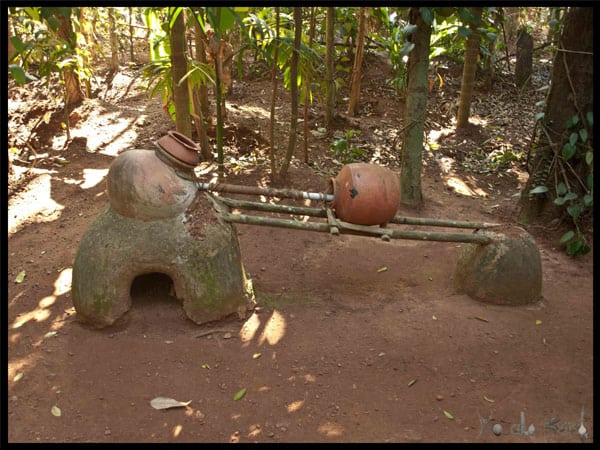 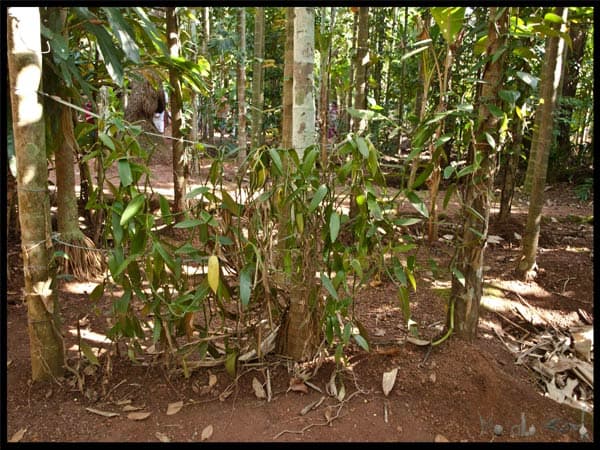 Vanilla creeper (pods had been removed) 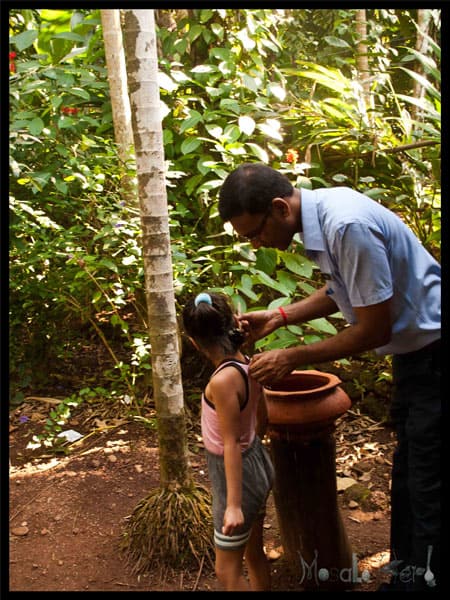 Entertainment is provided too for the visitors 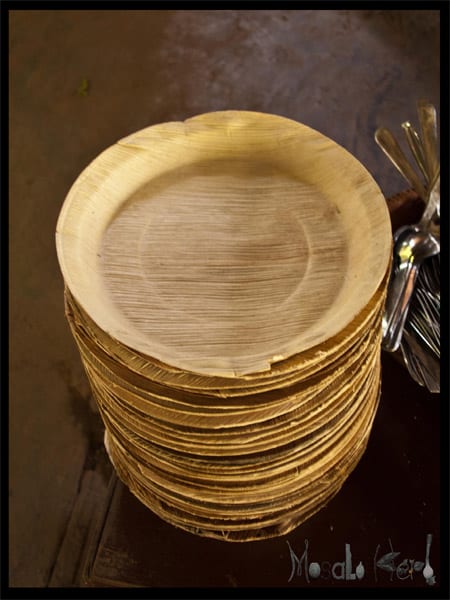 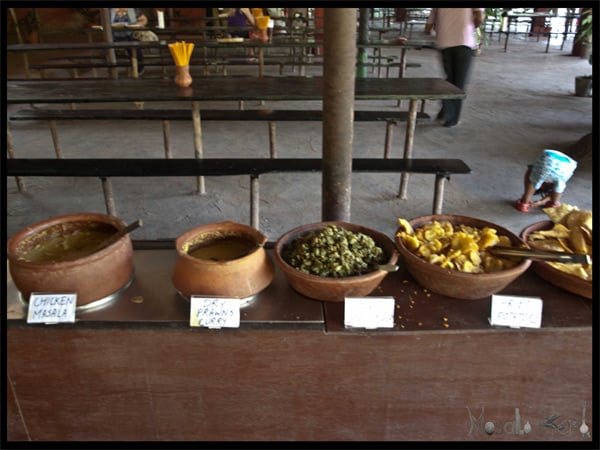 Food Buffet after the Tour 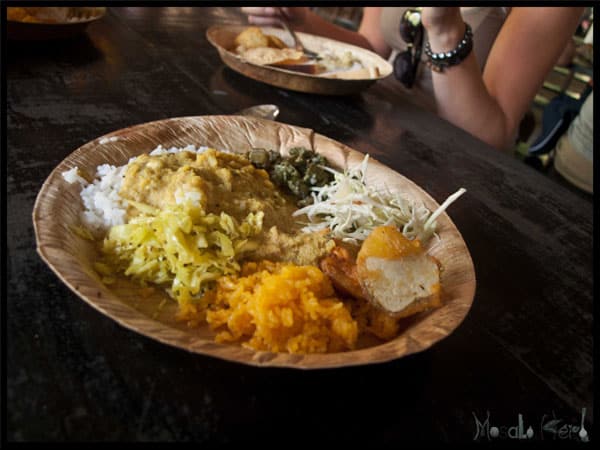 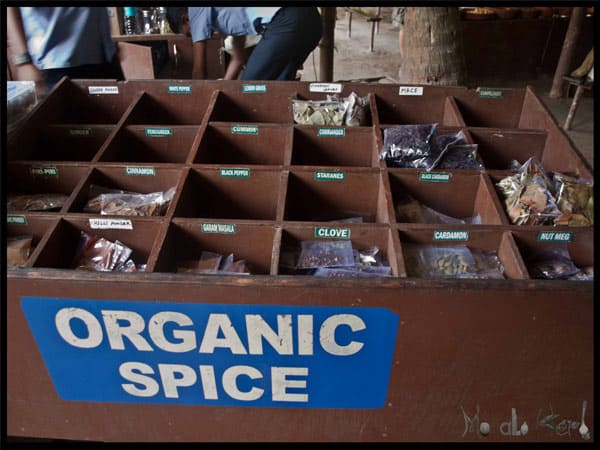 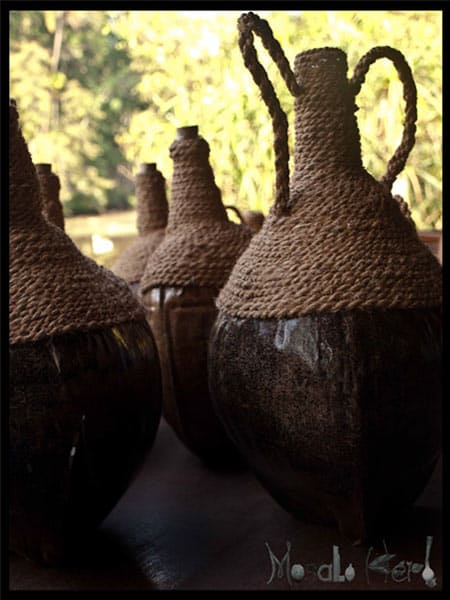 food served in the spice garden Goa has very basic flavors and isn't too much spiced, however, it's not Goan Portuguese food but rather Maharashtra Konkani food.

The place is well situated and your kind of place if you are with your family and friends. A must see for anyone who visits Goa and who likes to learn about food and culture of the region.