The Mirabelle Plum is a delicate fruit, commonly grown in France.

This is a Mirabelle tart with almond flour and a homemade shortcrust pastry.

When I take a bite of our homemade Mirabelle Tart, it is as though I end up in another world.

Drifting away with its taste and aroma.

Well, in fact it's not just any tart, it is a complete inspirational masterpiece of a baked tart.

It is my family's recipe, and it isn't just another sophisticated french pastry.

Mirabelle tart is something that everyone should experience!

What is the mirabelle plum?

The Mirabelle is a yellow and orange, round and small plum variety.

The prune's fruit flesh is soft, plentiful, sweet, and juicy. The seed is not all that large.

It's the most perfect little fruit!

The fruit is always associated with France due to the fact that some varieties have received geographical protection, most notably the Mirabelle from Lorraine.

In fact, they even organize Mirabelle feasts during harvest season where they crown a miss Mirabelle.

The word Mirabelle (mirabilis) originates from Latin, meaning "wonderful" or even "beautiful to look at". 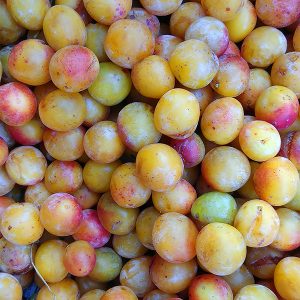 For the Shortcrust Base

For the shortcrust base

We leave the core in the Mirabelle (kind of gives an extra flavor). Feel free to remove them if you prefer without!