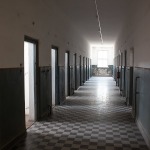 We visited Mauthausen in July 2020.

What happened at Mauthausen?

Political prisoners and persecuted minorities were forced to do hard labor and were killed in concentration camps during the nazi rule in Europe.

Inmates were liberated by the US army during the last days of nazi rule. Germany officially lost the war on the 7th of May 1945.

Mauthausen itself, is the name of the town located on the Danube river.

Nazi Germany had annexed Austria and soon after decided to build the concentration camp in Mauthausen. Other sub-camps, such as Gusen, existed nearby as well.

It is strategically located on the Danube river, at the border to Lower Austria, on a height overlooking the area and right next to a granite quarry.

The prisoners in Mauthausen were a mixture of persecuted political activists from Poland, Austria, Spain, Italy to just name a few, and a set of minorities from the region such as gypsies, jehovah's witnesses, members of the LGBT community, and jews.

The camp was extended over the year. In the beginning, the KZ consisted of mainly Austrian and German inmates.

The Russenlager (Russian camp), for example, was located outside walled main premises next to the SS sports ground and was for the Soviet political prisoners.

The SS (Schutzstaffel) were the guard officers of the concentration camp. They usually never directly touched the prisoners but rather set up a hierarchical system amongst the prisoners to force control over the poor souls in the camp.

At first, only men were imprisoned, later on many women were added, and this is why Mauthausen is known as one of the most horrendous KZs of its time.

The women were forced into prostitution, but not for the SS officers, but to keep the higher placed prisoners happy.

The main purpose of the camp was the location next to the stone quarry. It was a strategic move because the prisoners were forced to extract granite from the quarry.

The stairs are the path up to the quarry and are known as the stairs of death.

The farm houses near the quarry, had a view to the quarry yet...

... our guide explained the happenings and feelings back then all well and this is why I recommend you visit Mauthausen and take a guide because these things are still relevant today. History shouldn't repeat itself.

Visitors can not go down to the staircase.

The memorials are scattered but are mainly located in front of the main camp gate and in the death chambers in the basements.

Memorials, statues, sculptures with and without words are telling the story of those that died under the nazi regime.

The Bulgarian memorial can be seen on google maps and located around that are also the Italian and Polish memorials to just name a few of the many.

The heartbreaking personal memorials are mainly in the death chambers.

The gas chamber was a place where people were gazed, and then burned in the cremation ovens in masses.

While in Dachau (another KZ in Germany), they are still not sure if the chambers were ever actually used, in Mauthausen this is a sad fact.

The chambers are located under the main memorial museum building.

The emotions are quite overwhelming and it is advised that it's not a must to visit the gas and cremation chambers.

There is also a black room in the basement which has an inmate list of all the murdered prisoners.

The museum is very detailed and explains the tragedy all too well.

The Mauthausen KZ is free of charge to visit all year round.

In summer, beginning March to October end, you can visit from 9 am to 5:30 pm (please check last entry).

We recommend the guided tours, which are available in English, German, and French (and perhaps some other languages, please call the office).

The guided tours cost about 5€ p/P and 3€ p/P if it's a group and free if you are a KZ survivor or descendant.

You need to book your guided tour in advance to take part in it and the tour takes about 2 hours.

We liked the tours because the guide shows you pictures that were taken during that time and the guide explains well where everything happened and the timeline.

You can also ask questions so that you get an idea of how this all could have happened and why certain things went down the way they did.

It takes your thoughts to our current world and how our lives could turn anytime the way it did during WW2.

The guide helps you get things into perspective.

Location and getting there

The best way to get there is by car. I recommend renting a car or hiring a taxi ride or car with a driver.

Here are the car road directions with distances.

You can get there too by bus and then walk up the hill to the memorial. We saw some backpackers doing this. The bus line is no 361.

You can come by train with the ÖBB (Austrian train line) and get out at the Mauthausen train station which is located some 4 km from the memorial. Get a taxi or walk from there to the KZ.

Can I visit with kids?

We saw families with kids and it's definitely educational. However, I don't think it's a good idea to go with very small kids under the age of 5. The kids will need attention because the place is just not something they will understand and you as a parent won't be able to focus on all this.

Where is the car parking located?

The parking area is free and located right next to the Memorial and main office and food area building.

What's the atmosphere at Mauthausen?

People walk around quietly and hushed. You can hear folks whispering but tour guides talk in normal albeit lower voice levels. The thing is that family members of murdered prisoners are visiting the memorial, so you want to respect the dead too by being quiet. It's like a cemetery but more aggravated due to the history and horrendous crimes. Please behave respectfully. Don't do selfies and please don't bring your drone.

Is there a place to freshen up and tank some energy at the memorial sight?

Yes, the toilets are located near the main office. There is also a canteen with a buffet to purchase food and drinks.

Are there any movies about the Mauthausen concentration camp?

Yes, the photographer of Mauthausen is a Spanish film which really shows it all well. Many of the prisoners were Spanish, who had been sent by the Spanish dictator Franco to the German nazi camps. We watched it the same evening on Netflix after our visit to Mauthausen, because our impressions were still vividly clear. I recommend that you do that too.