Daniel James
The easy arepas recipe for making a Colombian Arepa is quite simple. Prepare and cook the corn arepa recipe  to make your own batch.
Total Time: 40 minutes
4.67 from 3 votes
Jump to Recipe

Colombian Arepas are popular flatbreads made of corn.

Daniel from Layer Culture is an expert in Colombian and South American travel food culture.

He shares his arepas colombianas recipe further below.

What is the Colombian Arepa?

The Colombian arepa is a versatile type of flatbread.

Sometimes they are also known as Colombian pancakes amongst the English speaking countries.

They are prepared with arepa flour, a variety of ground cornmeal.

Did you know that the Arepa, that has been at the heart of the Colombian family meal for many years?

Not only that, but the Arepa has a cultural significance to the people that prepare, cook and eat them.

Also, there are many different types of Arepas in Colombia, depending on which region you are in.

One thing that is certain when it comes to Colombian cuisine is that the tasty arepa is a pretty big deal.

If you have done any traveling in Colombia, you’ll know that the Arepa makes up part of daily life for Colombians.

Like going without a cup of coffee, many Colombians simply cannot live without it.

People who have studied its history have said that the Arepa is a food that existed way before the Spanish conquerors arrived in the Americas.

The Colombian Arepa recipe is made from corn.

The arepa ingredients are a staple for the indigenous people throughout the continent.

Today you can buy the Arepa ready packaged and almost ready to eat, all you have to do is heat it up for a couple of minutes on the grill or by frying it at home and you are good to go.

How to eat it?

Arepas are so versatile because they can be eaten for breakfast, lunch or dinner.

One thing that is common at the Colombian dining table is to see Arepas served with different toppings.

For example, the Arepa paisa, which is very common in the Antioquia region of Colombia; will be topped with butter and served with a block of cheese and an egg.

The truth is though, you can add and mix whatever flavor combination you desire and you’ll enjoy it.

Think of an Arepa as a vessel for helping you combine the ingredients that you love.

Venezuelan Arepas, on the other hand, are stuffed arepas.

The arepas filling can consist of various ingredients.

The Colombian version of the Arepa almost always has it’s ingredients on-top.

You’ll find that in Colombia’s Coffee Region, the Arepa is usually sold by street vendors and prepared fresh daily by a neighbor, or in restaurants and takeaways.

So, now we’ve uncovered what the Colombian Arepa is, will you try one?

The good news is, now you don’t have to go all the way to Colombia to get your hands on one, and you can make your own at home. 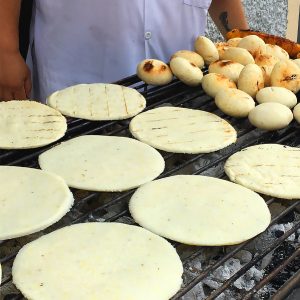