I remember a time when my clothes would carry a light burned smoky coal scent and a time when garlic butter flavors would be omnipresent.

It was a great and busy period in our life but even then there were days that seemed never ending, yet we loved it!

Aromatic Chicken pieces were taking a bath of a spicy flavorful curd marination, the freshly elastic nan dough was resting near the heat and the oven, the ever so hot Indian Tandoor oven filled with burning coal and most of the time with Tandoori Chicken, Tikka, kebabs and crispy nans.

But you know I like to be out of the norm so sometimes the oven would be filled with something less traditional such as my favorite vegetarian Tikka.

We used to run a Restaurant and our most precious dishes were the popular Tandoor baked chicken Tandoori, Tikka and Flat bread Nans.

I could eat that stuff every day, that good it was and of course the amount of customers coming back every day just confirmed my taste addiction.

It was perfected for the multicultural needs of Goa.

Still wanted and much enjoyed by all Domestic visitors but also sought after by the foreign visitors and of course the Goan locals.

Juicy, spicy and perfectly cooked inside.

Buttery garlic flavors on the crispy outside.

It couldn't have been any better and until today's day we have never encountered a restaurant that served such a wonderfully, brilliant cooked Tandoori chicken in Goa.

The flat bread nan was a staple food and I couldn't live a day without them, my blood was nan-izised!

I even ended up creating a salad nan version.

But besides the whole lots of boneless Chicken Tikka, Tandoori Chicken, Kebabs and nans, we had came across another brilliant tandoori dish and all that rather accidentally.

My husband had discovered those Soya chunks in the market, our cook had seen them before so he had an idea that the soya chunks needed to be soaked.

We were a creative lot of young chefs and we needed a vegetarian tandoori dish for the Indians that followed a stricter food diet, so after soaking we squeezed the balls, added them to the curd marination, left them there to soak in the flavors, took them out, added them to the skewers and baked them for a while in the Indian Tandoor oven.

The Vegetarian Tikka Soya was born and it was an instant hit.

At the beginning we thought we would try to fool some friends.

We gave them to try the Vegetarian Tikka with Soya and they proclaimed that these were really amazing tasting small chicken balls.

Yes, they thought it was chicken and time again others proclaimed the same.

You would eat a dozen with some shredded onion veggie salad and a cheese butter garlic nan and you would be satisfied.

Also they were cheaper then chicken, so we had a tandoori item in our menu that didn't cost more then 60 INR (~1 €) and that was indeed very pricy for Tandoori in Goa, India.

Soon our Soya Tikka balls became legendary and it became our signature vegetarian dish and everybody knew where one could get them on the Goan coastline.

Many other small Tandoori Take aways tried to copy the idea but they never succeeded.

Either the taste was wrong or it wasn't properly cooked.

Any Tandoori dish, that might be chicken or vegetarian needs to be carefully nurtured with a good amount of melted garlic butter, so to achieve a crispy outside.

Of course there are other things that need to be considered too such as the amount of curd and spices and of course  one should always work with quality ingredients.

The Indian Tandoor oven is an age old invention that mostly originated in the Punjabi/Pakistani area.

Tandoori Clay ovens have mushroomed all over India and even in the Western world.

Yet, often instead of clay you will discover that Restaurants use a big metal can like things in which they cook the chicken, which by the way doesn't make sense since the chicken won't get properly smoked and the temperatures don't reach that constant high heat that is needed to cook a perfect tandoori chicken.

Of course you can still cook Tandoori dishes in home ovens but you won't get the so much wanted coal smoked flavors in the dish.

For a while I thought that Tandoori ovens were called Bhati, in fact we all called it like this here.

No idea how it came to that, I am just the foreign gora who copied the Punjabi cook's words.

He also used to call a plastic jar dhaba, which I realized later on was his word for Tupperware.

A Tandoori oven is always hot or at least warm, even during the night time and day and here in Goa locals do not own a Tandoori oven in their houses.

Tandoori and Nans are mostly only sold after 5 pm and we would always add a little salad as side for free.

We had some big orders in our time with 50 Tandoori Chickens for 1 order or a whole box of freshly baked Nans.

Of course those orders had to be preordered so that we could organize ourselves accordingly.

The busiest time was always New Year and we even used to open in the rainy season, which by the way wasn't always easy with the massive amount of humidity in the air.

However the heavy rainy season enabled us to attract customers since nothing else is ever open during the monsoon and I have to say when I smell Tandoori nowadays I will always remember the humid rainy conditions and the hot comforting tandoori oven warming my hands.

Here you can see our Tandoori oven above.

Of course the picture isn't the best but it's alright.

You can see that this is the working space of a Tandoor cook and the oven is covered.

Unfortunately I don't have a picture of the oven from inside.

Otherwise I would have been able to show you how the nan used to stick and bake on the inside borders of the Tandoori oven.

The coal would be super hot burning and the chicken tandoori skewers would be held down and taken out of the oven frequently for a butter wash before giving them some more time to perfection.

The working space usually always has some garlic butter around, some flour for the nan "workout" and the chicken hanging somewhere on top so that customers could choose theirs as you can see. 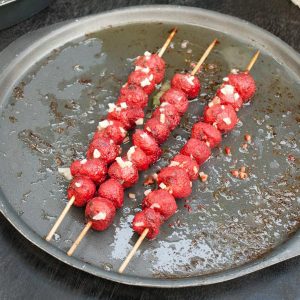 For a restaurant-style Indian tandoori chunks recipe, add red or orange food coloring. Otherwise skip it. I added food coloring to the recipe. You can get natural food colorings here too.