You are Here: Masala Herb » TRAVEL » Things to see in Slovenia (Europe) 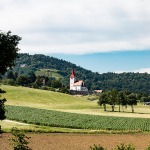 This post is there to inspire you to add Slovenia, a small European country, to your travel bucket list for the future.

💭 FAQs in a nutshell

Slovenia is located in Europe. It's bordering Austria to the north, Hungary to the east, Croatia to the South, and Italy to the West.

It's part of the European Union so, Schengen visa applies here and they have the Euro. Simplifying travel all the more!

The locals speak Slovenian and they sometimes remind me simply of Austrians by their ways and how they live. (Austrian here). Some people speak English or German too.

Slovenians are nice friendly, helpful people, and once you get to know them, they will treat you like great friends. They are slightly distant at first but they warm up quickly.

Food and drink are cheaper (about half) than compared to neighboring Austria or Italy. We paid about 3-4 Euros for a meal and then about the same for single entry museum tickets.

To get around Slovenia, hire a rental car or motorbike with a highway sticker. That way you can get around and discover some of the best lesser-known places.

Here are our favorite discoveries and places to visit in Slovenia.

Ptuj is the oldest city in Slovenia and it has a very rich history. Walk around the city to discover the old buildings and small boutiques.

The castle is the center of the city, located on a hill. It houses a museum with different historical and art collections.

Ptuj is a must-visit if you want to learn more about Slovenia and the countries history and culture.

Slovenia has some beautiful caves. The most famous and most frequented caves are the ones in the west, Postojna, and Skocjan.

We enjoyed smaller caves too, such as the devil's cave seen in the image. You will literally have the cave to yourself!

A visit to Slovenia is not complete if you haven't visited the capital of the country.

Ljubljana is known for the old town quarters, it's green side and as a city rich in museum culture.

The national museum and the museum of modern art are recommended.

Maribor is located in the wine region and it's a quaint city full of history and beauty.

The oldest vine in the world still producing fruits is growing in Maribor. It's listed in the Guinness book as a 400-year-old vine plant.

Our insider tip are the most precious university gardens of Maribor.

The entrance is super cheap and the whole area is massive. They grow all, really all local plants, trees, flowers, herbs there. It's magical and we had the whole garden to ourselves!

If you are into retro motorbikes, you will know Puch.

Puch was created by Johannes Puch a Slovenian. Slovenia was part of Austria back then and so he started out in neighboring Styria (Austria).

The company still exists but nowadays they make e-bikes but the old motorbikes are still wildly popular.

The official Puch Museum is located in the east of Slovenia and is a must-see if you love to learn about the creation of the first motorbikes in 1901.

The former first lady and model Melania Trump was born in Sevnica, in south Slovenia.

An artist was commissioned to build a statue in her honor, but the wood statue was burned down.

So, they rebuild it but in bronze, and since that people have been visiting this otherwise forgotten corner of Slovenia.

So I'm not sure if it's worth a visit but, perhaps it's right up your alley. There is a castle nearby too and it's a serene quiet part of the country.

Žiče is a medieval monastery of the Carthusian order. These were monks who valued the written word and languages more than anything else.

The place is a partial ruin but it's being continuously renovated. It's a magical place with a Camelot vibe.

They organize special events and reenactments there during the summer months and this place is a must if you want to immerse yourself in the area.

Slovenian beaches are located in the west, between Italy and Croatia.

The country has a small stretch of beaches.

Just like Croatia, the beaches are made of little pebbles, so no sand.

Which has its plus points because the water is clear and magnificent but the downside is that you will need to buy some beach shoe wear to go into the water.

The most well known beaches are near the towns of Izola and Koper.

The north of the country, bordering Austria and Italy is known for some of the best mountain resorts in Europe.

The alps are separated into three main parts: the Julian alps also known as Venetian alps near Italy, the Kamnik-Savinja Alps, and the Karavanke alps to the north bordering neighboring Austrian Carinthia.

Our insider tip: Velika Planina is one of the most authentic places in the Slovenian alps. It's a day trip from Ljubljana.

Most big waterfalls are located in the north, except Susec which is in the south of the country.

If you love waterfalls, look up Pericnik, Kozjak, Virje, Rinka, Iglica to just name a few.

Slovenia is a country of gorgeous crystal clear turquoise lakes.

They are scattered all over the country so eventually you will come across one.

The most well known lake is lake bled. It had an island with a historical church on it.

Some other noteworthy islands that you may want to visit are lake Bohinj, Jasna and Krn.