You are Here: Masala Herb » Japanese » How to make Sushi at home

In June 2002 the long-awaited and planned trip to Vienna with our secondary class finally came to happen.

We had been looking forward to it for a while.

Four odd teenage years and hundreds of agonizing watchful school days later and we were off to experience a different scenery for a whole week.

The city was calling my name and I could only see a glimpse of hope, a certain smell of freedom was lingering in the air.

I was never the popular kid.

No I was the geeky french and I did try my best to avoid troubles and politics, however, I was aware of the insults and idiotic words are thrown at me.

Yet, I was prepared and my plan was to show those kids that they were wrong about me all those years.

Seriously, my show was perfect, and yes I did get the respect that I had been striving for.

Contact lenses, a dress and my experience for traveling were my weapons.

That day was the day when I finally found my self-esteem and trust in myself self and from that day onwards I had been bolder and I was ready to explore the world in peace.

After visiting Schönbrunn & Belvedere palaces, the St.Stephan's Cathedral and so on we got the chance to visit the Naschmarkt, an old and popular market area in Vienna.

For a few hours, we were free to roam about and do our little shopping.

I and 2 friends took some time to roam about and then I saw it, a real Sushi Restaurant!!

I had never eaten Sushi before, of course, I had heard about it and seen it occasionally on TV, but that was about it.

So with all my elan, I dragged my two friends into the place and somehow convinced them to have some with me.

The Sushi was super expensive but I didn't care, I needed to give it a try.

I was in a craze all of a sudden and I could believe that I  controlled everything.

The Sushi came, I had a bite and I was smitten, my friends on the other hand didn't find it that cool.

I don't know why, but I never forgot this day and the Sushi became a  sign for a new beginning in my life.

Ten Years later my love for Sushi has only grown in size.

The sole issue for a while now was the fact that certain ingredients were not available here in Goa.

Fortunately, my Bavarian friend and I had been planning to make homemade sushi for over a year, so she brought some ingredients from Germany back to Goa.

Further, I arranged for some fresh ingredients such as veggies and prawns for the filling.

Making Sushi rolls at home is fun if you have a friend joining the making.

Even if you are planning to make it by yourself, you will realize how easy it can be.

For sure the Japanese have their special rolling and cutting techniques and of course, they own some great knowledge all-around their national food, oh and let's not forget how detailed they are and how well they decorate food.

Just look at Nami's amazing creations, she posts from her Japanese kitchen at Just One Cookbook.

However we were not striving to make the prettiest Sushi or the most unusual, we were set on having a blast and in the same time we decided to fill the Sushis to our liking.

Sushi is something special and fresh that comes from the anime and video gaming lands, it is so unique and exotic to us that it holds a special place at least in my food experience.

I don't indulge it that often, I wish I did though, but then most probably it wouldn't be anything special anymore.

Therefore, I believe it is a dish that you can try to make to treat your senses on one fine day when you feel bored at home.

Or how about calling your neighbor, who you hadn't had the time to spend within a while, and plan together on making sushi rolls at home?

I can tell you one thing that it is a relaxing therapy to succeed a neat sushi roll and a certain feeling of pride comes to light as well.

I am not an expert, just a lover, and a crass sushi fan, BUT I decided a making Sushi rolls post was needed because apparently the whole world still thinks that sushi is just raw fish.

That isn't the case, in fact, the small amounts of prawns and calamari I used were precooked for a short while.

We decided to do that, although our fish was fresh from the Goan harbor because we wanted to go sure since the temperatures were soaring that day.

Some had all the ingredients some had only cucumbers or prawns, I call it freestyle Sushi making.

A few rolls were smaller since we cut the Nori Seeweads into two, but most of them were bigger rolls.

I thought today I would just introduce you to the making of Sushi and let you choose a filling of your choice.

Dear Reader, did you try the Recipe? 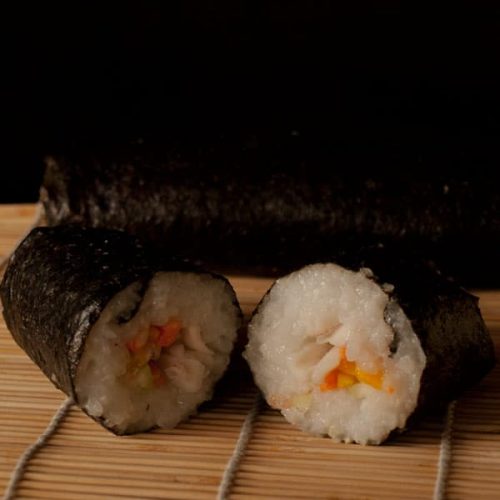