Madeleine, the sophisticated little shell formed cake treats, are next to tarts and crepes, exactly what I would define typically traditionally french.

If you don't know Madeleine then I can tell you that you are missing out big time on some of the best tea time treats in this world!

In our house, it is a common much loved cake.

It is simple and quick to prepare your own batch at home and guests always enjoy them at any time of the year.

Normally we tend to make more then just a dozen, since they disappear in no mans time.

The history around the Madeleine is quite a controversial one.

The Larousse Gastronomique offers two very different histories all around the little cake.

One of the 2 stories is, that a servant called Madeleine Paulmier, from Lorraine North east France, may have been the inverter of the cakes.

From the 19th Century till the 2nd world war, the cakes were sold by saleswoman to the traveling train passengers, who would roam around the stations with their huge straw baskets, shouting out to get noticed for their freshly baked Madeleine.

It used to be a huge attraction and show for travelers, since those woman had only a certain amount of time to their disposition to sell their Madeleine before the trains were to depart.

That contributed enormously to the popularity of the small handy cakes!

Over time they gained popularity on the whole continent.

In 2006 Madeleine were chosen to represent France at the Café Europe initiative of the Austrian presidency of the European Union, on Europe Day.

The initiative included a presentation, called Sweet Europe, of typical sweets and cakes of every member state (at that time 25 countries).

My childhood was much influenced by the existence of Madeleine.

My mum would bake some nearly every week and we would finish them pretty quickly.

We kids would dunk them in our teas and the grown ups into their coffees.

Sometimes we would take some too for our school break time.

It was an ever present treat!

As I had mentioned above, they are pretty easy to recreate.

What you will need is an oven, the base ingredients and the famous shell forms.

If you don't own those special forms then you can surely make them too in some other small forms.

The shell forms are the traditional way, but they are mostly for the eyes.

I am not sure if they have any physical benefits, for example for the rising of the dough.

Certainly you will have as much fun with this recipe as we have.

I have modified the base recipe a bit by adding my self made Dandelion jelly (which is kind of like honey) instead of the honey.

That influenced the flavors of the cakes in a very interesting new way. Of course you can stick to simple honey in this recipe too!

Maybe one day your children will connect their childhood memories with the famous, delicious, french Madeleine! 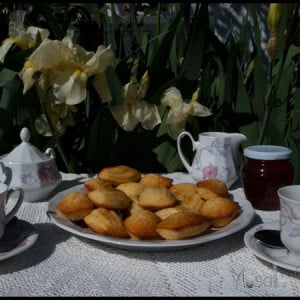