You are Here: Masala Herb » TRAVEL » Guide to Styria Austria 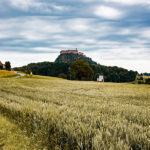 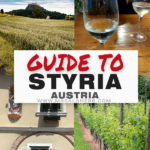 Styria is known for its vineyard landscapes, hot water wellness spas, and its food and wine culture.

Plan your trip to this beautiful region with our tips!

Styria is a region located in South Austria, bordering Slovenia.

The region has the alps in the west and hills with the vineyard in the more temperate east.

You will take about 1-2 hours from Vienna or Salzburg to get to Styria.

The region's capital is Graz, a historical and lesser-known city to non-Austrians.

Styria is called Steiermark in German (Austria speaks a form of german).

The region is a well-known insider travel tip among Austrians, yet foreigners don't hear much about Styria.

Which I believe you need to change, because Styria is a hidden gem in Austria!

Things to do in Styria

I have outlined the top things that styria is known for. This includes attractions and things to do.

Styria has some of the best thermal hot water baths in the world.

The eastern parts of Styria are known for hot water springs that have healing properties.

The waters are rich in minerals and it's hot water coming directly from mother earth.

These are called "Therme" in German and they are public baths which also always have a neat sauna village attached to the facility.

You can get a day or hourly ticket for just the thermal bath or just the sauna or both combined.

Day tickets are priced somewhere between 30 - 40€

These are the best hot spring baths in Styria:

When in Styria, eat your way through some of the best food in the country with a glass of amazing local wine!

You can drive down the wine road, across hills with vineyards, and try different wines. It's also known as the Tuscany of Austria.

Look out for so-called Buschenschanken. Those are run by vineyard farmers and they serve up their wines with local charcuterie boards.

You get to eat yourself through the best meats, cheese, bread while drinking the best wine ever. Pair this with good company and it's perfect!

Styria is also known for it's so called black gold, the pumpkin seed oil.

The best cold-pressed pumpkin seed oil we found was at the Pechmann's old oil mill. That place is anyway worth a visit. The deco will blow you away!

The region is also known for their runner beans. It's a bean variety called Käferbohne in German. They use it in salads and soups.

Bad Radkersburg is a total insider tip! You won't see that many people from around the world there, but it's a germ worth visiting.

The small city is surrounded by a medieval wall and the buidlings are traditional to the region.

The city is located right next to the Slovenian border, you can walk over the bridge and you are in another country.

Besides that, the small quaint city is known for the thermal spa.

The Riegersburg castle is one of those instragrammable fairy tale castles.

It's a medieval stronghold which was never taken by the enemy.

The castle is located on a rock and to get there you can either walk up from the city side or take the funicular from the backside.

That said to walk up you will need to pay too.

The visit is well worth it, they have various exhibitions on top besides the story of the castle.

We visited when they had an armory exhibition and they also talked about witches of the time and how these accusations came to be back then.

The exhibitions were really well done and you definitely immerse yourself.

You will also get a gorgeous view from the top down!

Graz is the capital of the region and a medieval city.

It's home to the Schlossberg castle with the clock tower and countless art museums.

Some of the most well known museums are the...

We loved just strolling around the old city with its renaissance and baroque monuments.

I personally haven't been skiing in Styria because we have the better slopes in Tyrol but Styria is known for some great slopes too.

The slopes in Styria are especially good for beginners and families because of the height and length.

A seasoned skier might fell underwhelmed in those ski resorts yet if you are on a budget, then styrian skiing resorts will be your choice.

Most are cheaper than the expensive skiing day cards offered in the east of the country, yet be aware that snow security can never be given.

The Styrian tourism board has a list of recommendations.

The green lake, called Grünersee in german, is located in Tragöß-Oberort, in North Styria. It's in a nature conservation area.

The lake is such a big deal because of its color AND because the lake looks different every season.

In winter it's a puddle of water and when the snow melts it turns into a crystal clear beautiful lake.

Best time to visit this magical place is in June.