You are Here: Masala Herb » TRAVEL » Guide to Rouen France 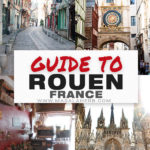 Your complete guide to Rouen in France.

I share info on how to get there, the main must-see attractions, and why you ought to add this inspiring french city to your itinerary.

Where is Rouen situated?

Rouen is situated in North France, some 2 hours distance from Paris.

The city is the capital of the Normandy region, a region famous for food and its history.

Regions in France are also split into departments. Rouen is located in the Seine-Maritime (No 76 on car number plates).

Rouen has a small airport but it only caters flight to the French island Corsica. So, you can't get to Rouen by flight. You are better off flying into Paris.

Therefore, the best way to get to Rouen is by train or by road.

You can get to Rouen by train from Paris.

The ride takes about 90 minutes, and it's your fastest option. It's a regional train which stops frequently.

However, it's perhaps the most sensible option to take the train if you want to watch the countryside move by.

You won't have to deal with parking in the city and train connections are good enough between the two cities.

There are also connections from Amiens and Calais (coming from the UK) but those are tediously long.

So you are better off using Paris as a starting point if you are moving around by train.

By Car or Bus

By far the easiest way to get around in these countryside regions in France is by car.

That said, be aware that speed limit restrictions and radars are frequent.

In fact, they are super annoying and you can get fined for 90 Euros (comes by post) if you are just a few km/h to fast.

Parking spots should be plenty in Rouen but of course they are not for free and the low emission zones are not a thing yet in this french city.

Instead of taking a rental, you can get a bus ticket on a flixbus.

The tickets are quiet reasonable and the connections are plentiful, so I totally recommend flixbus.

Things to do in Rouen

Rouen is a city that never lost it's authenticity!

It has the architecte, the food and the people to make it a real french experience.

Here are some of things that we recommend you do or that you should check out.

Walk around - Attractions in the city are all nearby and you need to move around to take in the beauty of the buildings. This will be your prime thing to do anyway.

Cathedral and churches - The cathedral of Notre Dame is located in the center of the city. They show pictures of the partial destruction of the cathedral during WW2.

There are also other Gothic churches and religious buildings all over the city, which are well worth a visit. The architecture is always mind-blowing!

Le Gros-Horloge is a large beautiful renaissance timepiece with intricate paintings located near the cathedral. You can't miss it if you walk around.

Rouen is also known for the medieval freedom fighter Joan of Arc.

A church was build in the spot where she was believed to have been burned on the stake for witchcraft by the English.

The Donjon de Rouen is where Jean d'Arc was kept before her trial and that can be visited as well.

The Museum of fine arts of Rouen is also well known and highly recommended. The museum has paintings from all over Europe from the renaissance, baroque, romanticism, impressionism period.

The Botanical Gardens are located outside the city and we recommend you visit them because you can take a break there to take in the beauty and they are free.

The gardens have an extraordinary amount of plants and as a plant diversity lover, you can't miss that. Besides, there is a playground for kids too.

You can decide on making Rouen your base when in North France. Especialy if you want to get away from Paris.

Here is a list of other places worth visiting if you plan on doing some day trips.

Food and Drink in Rouen

Food and drink is huge in Normandy!

Apples have long a tradition in this northern french region. Calvados and apple cider are both prepared with apples.

Look out for calvados to take back home. You can make a real french apple cake with that!

Normandy is your drem destination if you love cheese.

The camembert (the stinky one) and the neufchatel (heart-shaped cheese) and both from Normandy. Look out for the AOC label to get the real deal!

We also discovered some amazing candy shops in the city. They sell authentic and various soft nougats and licorice sweets. You will never find anywhere else better!

When in Rouen, I recommend you dine at the Pomme d'Epices to taste real food from the region. The deco will take you on a journey through time and they have some seats facing the Donjon outdoors.